The planning and building of Christ Church was started in 1525 by Thomas Wolsey, Lord Chancellor of England under King Henry VIII (he showed up a lot in the TV mini-series The Tudors). In 1529 Wolsey fell out of favor. With the construction three-quarters complete, it sat unfinished. It was finished and refounded in 1532 as King Henry VIII's College. Then refounded again by King Henry VIII in 1546 as Christ Church (after he broke with the Church of Rome and acquired great wealth through the dissolution of monasteries in England). I guess that means the monasteries meant to do good, and they ended up doing great. 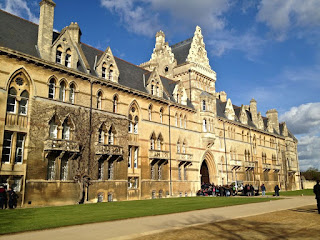 The visitors entrance where lots of Harry Potter fans gather for a tour. 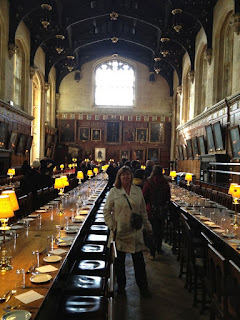 Maria in The Hall where Harry Potter and his schoolmates were served their meals. Well, actually, the Great Hall in the Harry Potter movies was inspired by this Hall and built as a movie set on an indoor sound stage. The current students of Christ Church had just finished lunch, and the staff was still putting things in order. 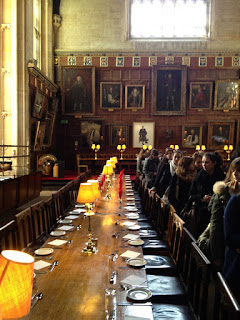 The High Table is in the background, at the end of the room. It's where the faculty, special guests, and high-ranking wizards sit during meals. The faculty wears their graduation gowns. It's more prestigious to wear your MA graduation gown than your PhD gown (if your MA degree is from Oxford) because Oxford awarded MAs long before they awarded PhDs. Robin got to sit at the High Table at Regent's College when she was a guest of Lynn's. She also sat at the High Table of Merton College the couple of times she took a summer course there. During the Merton summer classes, a different student is invited to eat at the High Table for each meal. 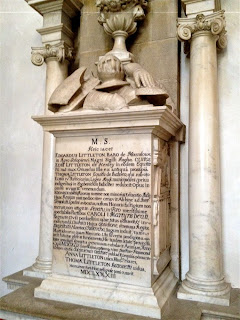 A monument in the Christ Church Chapel. I've included it as one of many reasons I don't work in marble. It's just too darn difficult to adjust fonts, point sizes, and margins later. 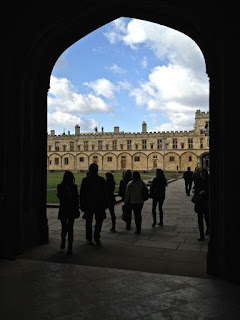 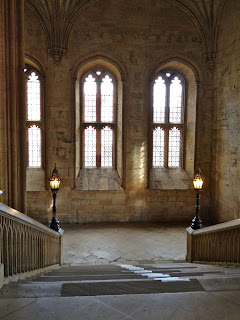 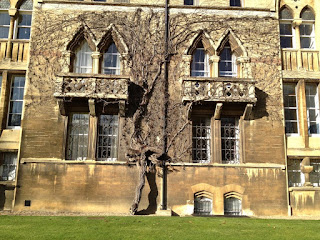 I'd love to see these vines in Spring or Summer. 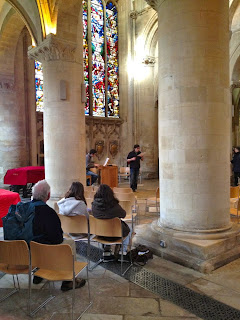 The bell in the tower (Great Tom) is rung every night at 9 p.m. 101 times for the original 100 scholars of the school and one other scholar added in 1664. Originally this was done at midnight to signal the midnight closing of all college gates throughout Oxford. Since it took 20 minutes to ring the bell 101 times, the Christ Church gates weren't closed until 12:20. Even though the ringing has been moved to 9:30 p.m., Christ Church retains the tradition of keeping their gates open until 12:20.
Posted by Unknown at 7:02 AM