The Tower of London

The Tower of London was first built in 1066 by William the Conqueror. That original tower in the center of the complex is still there. In good shape too. The complex was expanded and modified over the centuries, mostly during the 12th and 13th centuries. Things like an interior defensive wall, then a second exterior defensive wall, then a moat. And other buildings. Suffice it to say this is the center piece of London history. It scares me to think of how long the lines are going to be here during the Summer Olympics in July and August. 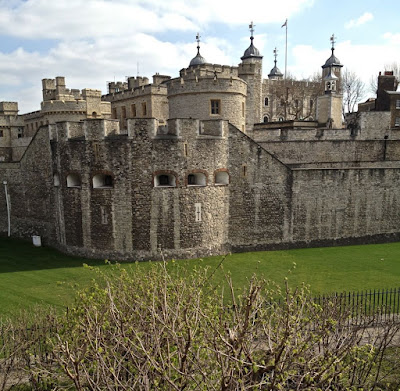 The grassy area is what used to be the moat. It was much deeper than it appears now, but was unintentionally filled with waste over the years when the planned drainage didn't work like it was supposed to. They claim that's why the grass is so green. It was eventually decided that draining the moat was better than being surrounded by sewage. 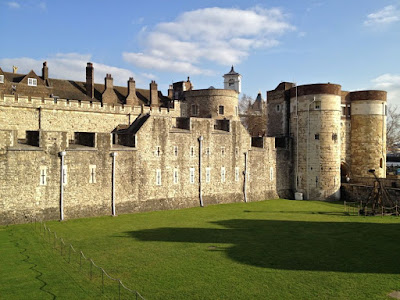 The visitor's entrance is between the two round towers. 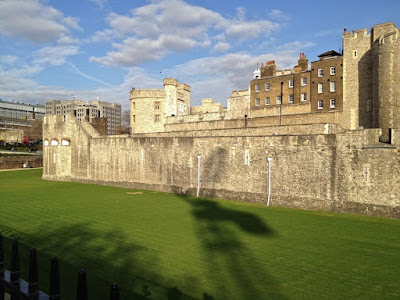 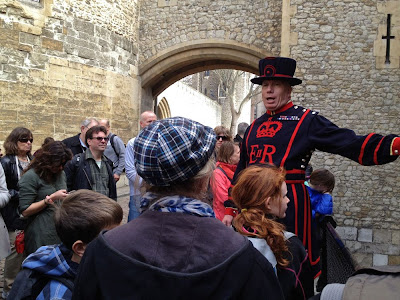 Beefeaters give free tours. Their real name is Yeoman Warders of Her Majesty's Palace and Fortress the Tower of London. They're the official guardians of the British crown jewels and they live in the Tower. Our guide was quintessential drill sergeant material. You have to have a minimum of 18 years of exemplary military experience to be a Beefeater. This guy had 36. He was an interesting combination of drill sergeant, entertainer, and comedian. Like most drill sergeants, now that I think about it.

If you live in the Tower of London, you're locked in at 10 p.m. A doctor and surgeon have offices here in the tower walls. No Starbucks. No pubs. Probably plenty of ghosts though. 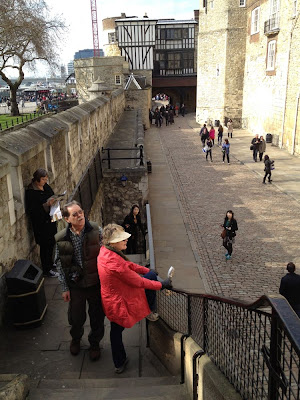 A couple of condemned prisoners look for the way out. 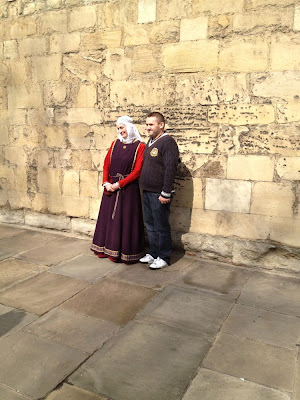 A medieval maiden, obviously looking for a knight. Not you pal. 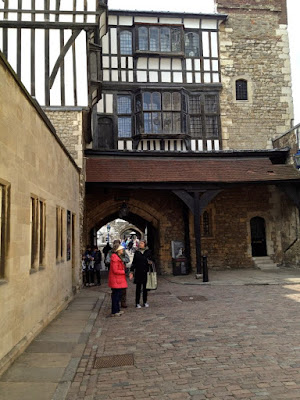 The complex is quite complex. Lots of buildings and towers, some of them built into the interior defensive walls. 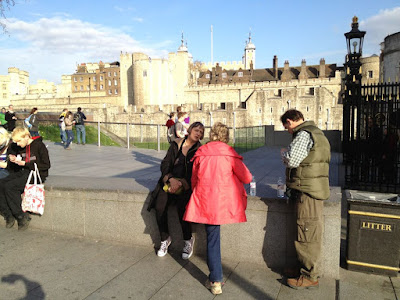 These three get around. I see them everywhere I go. 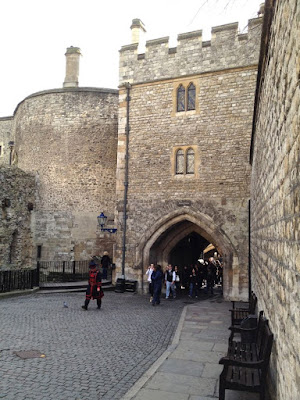 A Beefeater leads a group to their next gathering location. 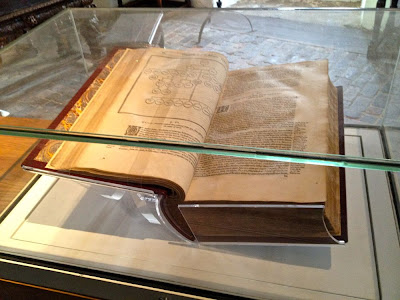 On display in the tower where Sir Walter Raleigh was held prisoner, an original edition of his book The History of the World. 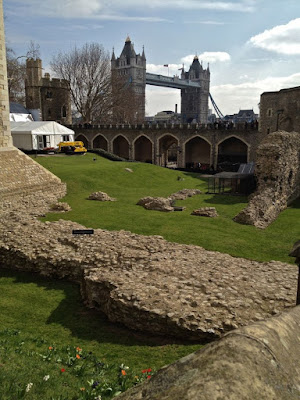 Tower Bridge, on the River Thames, from inside the Tower of London grounds. The ruins shown here are where ancient walls and towers have fallen. But the White Tower, barely visible on the left, is the oldest structure here, and obviously better built. 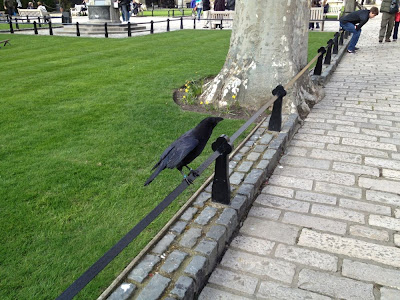 One of the ravens of the Tower of London. Legend has it that if all of the ravens leave the Tower, the British Empire will crumble. So they take good care of the ravens, feed them, and clip their wings so they can't fly. There must be at least six ravens there at all times, to prevent the kingdom's demise. They have extras, just in case. Every once in a while you'll see a raven walking with tourists toward the exit, looking nervously at a map and trying to blend in. But the Beefeaters always see them and shout "Git back to your post raven!" 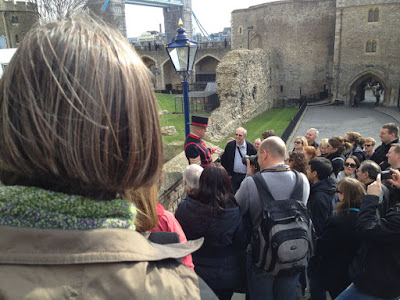 Legend has it that if all the Robins leave the Tower of London . . . 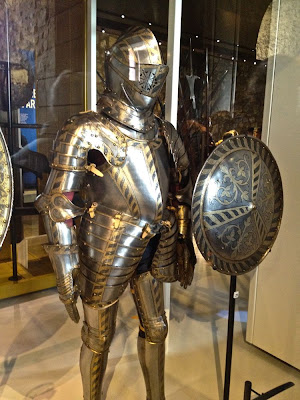 The White Tower, in the middle of the Tower complex, is an amazing structure. Hats off to William Conqueror and his builders. The different floors are now used as exhibit spaces for things like armor and weapons. 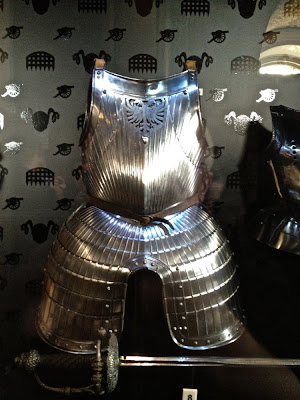 I'm glad I don't have to wear this stuff. Just one outfit and the closet is full. 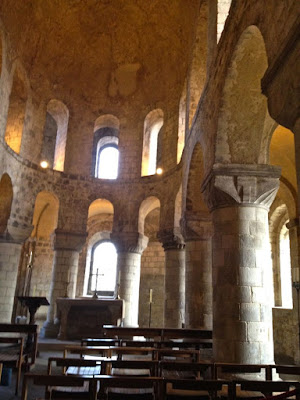 An amazing chapel built into one of the upper floors of The White Tower. These guys in 1066 thought on a different scale than I usually do. I guess that's one reason why they conquer countries and I don't. Heck, I didn't even know that was an option. 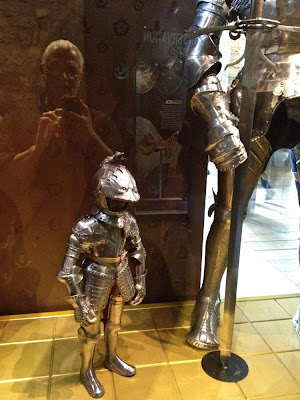 It's such a proud moment when you give your kid his first suit of full body armor. "Take good care of this suit Lil' Conqueror. It cost daddy a fortune!" 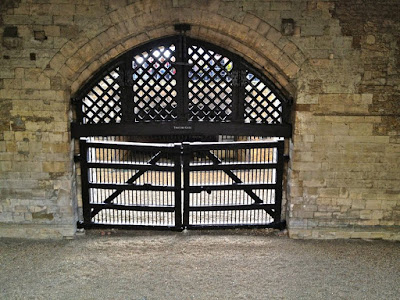 Traitor's Gate. What a tale of woe goes with this gate. This is the entrance to the Tower that you definitely do not want to use. It means you're going to be a prisoner in the Tower, and probably executed. The future Queen Elizabeth I was brought through this very gate, imprisoned, eventually released, and then became the Queen of England.