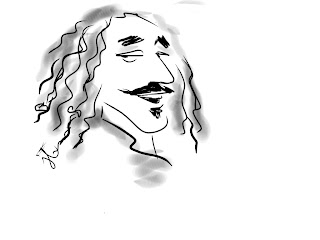 Another unforgettable night of theater, this time at The Comedy Theatre, located in London's West End (legendary theater district), near Piccadilly Circus (the Times Square of London).
The play starred Mark Rylance and co-starred David Hyde Pierce ("Nigel" on the TV show "Frazier.")
Originally written in 1992, its revival has been selling out, mainly due to the Rylance performance, which is remarkable. The story is set somewhere around the 1700s (I think). David Hyde Pierce plays a playwright and his acting troupe who are sponsored by a wealthy princess. The leader of the troupe has been ordered to add Rylance, another actor/writer, to the group, to the horror of the current leader (Pierce), because he detests the Rylance character with a passion, knowing him to be an arrogant egomaniac who never shuts up and never stops praising himself.
When Rylance makes his entrance on the stage (after Pierce has ranted about how insufferable the Rylance character is), Rylance launches into a fast paced non-stop rhyming monologue of self praise that lasts at least 20 or 25 minutes without a pause, while the other two actors on stage just stand there with their mouths agape. Rylance's portrayal of the buck-toothed, offensive, bombastic egomaniac is hilarious, brilliant, and pretty darn mind-boggling.
it's a relatively short play, about an hour and a half, with no intermission. The set design, costume design, and lighting were fabulous. Three curtain calls and a standing ovation.
Above, a sketch of Mark Rylance, in character, using the ArtStudio for iPad app.
Posted by Unknown at 10:04 PM