Monday had more than it's share of tube rides and Underground stair-climbing. We tubes into London, visited The Monument, a 202 ft tall column with stairs to an observation platform at the top. 202 feet away is where the Kings Bakery was located on Pudding Lane, where the London Fire started and burned down a large section of London (late 1600s?).

We crossed over to the south bank of the Thames and found The Golden Hinde, a replica of the ship that Sir Francis Drake used to circumnavigate the globe between 1577 and 1580. A golden hinde is a golden deer. The harbor where it's docked was a free harbor for people associated with the nearby church. 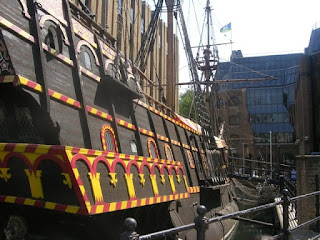 From there we tubed to the National History Museum, an amazingly beautiful building with some amazing exhibits, and then, a block away to the Science Museum. We didn't have too long at either museum because we were on our way to London's West End to see La Bête, a play starring Mark Rylance (creative director and actor at the Globe theater for its first ten years), David Hyde Pierce, and Joanna Lumely.
Posted by Unknown at 10:05 PM