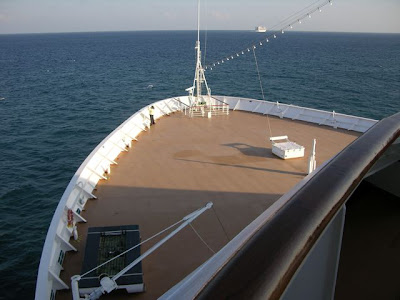 Elizabeth West on the bow of the ship.
Posted by Unknown at 8:27 PM

It occurred to me that at some point in the future -- the year 8008 for instance -- cruise accommodations will look just like this, except it'll be the Holland Galactic m.s. Volendam (still "m.s" for Motor Steam). The Captain's voice blares from the intercom: "If you've booked a planet excursion, please meet on Deck 900 to board the launch. Be sure you have your ship card and a photo hologram with you in order to re-board the ship." Or maybe not -- I'm just saying...

Today we were docked at Curaçao all day. Robin's mother took a trolley tour. Curaçao was discovered by Alonso D' Ojeda in 1499. It's name is Portuguese for "Heart."

Robin and I stayed on board the ship, checked email, posted a blog or two. We watched a great movie at the Wajang Theater. The name escapes me, but it was a masterpiece of character development and universal themes (love, honor, betrayal), just like Shakespeare. Interesting that the cruise people were insightful enough to include this film at the same time that Shakespeare is being studied and performed on the ship. Hopefully someone besides me noticed the connection. I'm sure I'm not the only one that's smart enough to see the parallels. Oh yeah, I remember now -- it was "Mr. Bean's Holiday." Great stuff. I cried.

After the movie, Elizabeth Thornton, Robin, and I went to the 9th deck to have a drink in the Crow's Nest bar. Nice place. Great views. They stay open until 1:30 am. But if they have customers, they can stay open until 5 am. Considering the cost of drinks here, only rich people will be still drinking at 5 am.

We decided to pass on the Chocolate Extravaganza being offered after dinner. Just walking past the spread of chocolate desserts added 5 pounds. On a related note, one of the patrons of the Oregon Shakespeare Festival said he'd warned the Festival director that if he didn't start getting younger audiences, he'd have to start installing wider seats.

We've departed Curaçao and are headed North-West, in the direction of the Venezuela and Columbia coasts. Next stop: Panama Canal. We'll be at sea all day tomorrow (Thursday) and tomorrow night, then enter the Panama Canal at Cristobal at 5:00 am Friday.
Posted by Unknown at 8:08 PM 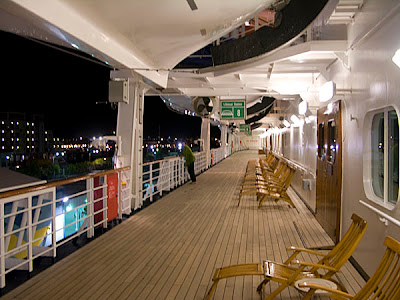 Robin contemplates Aruba from the Promenade Deck.
Posted by Unknown at 7:31 AM 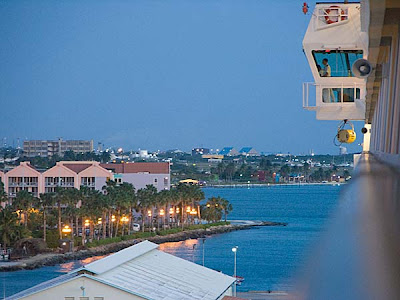 Ship officers view Aruba from the Bridge (telephoto shot from our room's balcony).
Posted by Unknown at 7:25 AM 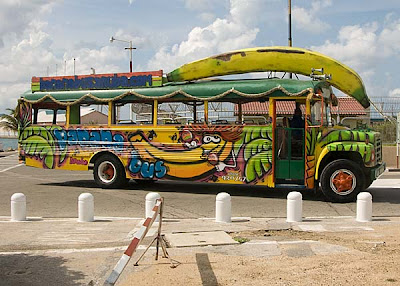 A friendly looking bus.
Posted by Unknown at 7:14 AM

Do you know where the name "Google" originated? The two founders of Google thought that "googol" -- the term for a 1 with 100,000 zeroes after it (or something like that ) would make a cool name, but they misspelled it. By accident. "We didn't have the Google spell checker at the time" they explained.

That's just one of the things we learned in our morning session, "Extreme Googling," presented by David Pogue, (technology columnist for The New York Times). Other fun stuff was presented, including David groveling apologetically because he didn't realize today was his presentation and was late. Then the projector wouldn't focus. No problem. His comedic style charmed the audience. Later this week he's giving a presentation about Leopard, Apple's new operating system.

Robin wasn't there because she was busy making her first Shakespeare presentation of the cruise to a nearly full house in the Wajang Theater on the ship. I left my event early and grabbed some video of the last couple of minutes of her show. As the audience left, I heard comments like "great" and "fabulous." Several people invited her to speak to organizations they're affiliated with.

We had a fancy dinner at the ship's fancy restaurant with Robin's mother, Pat, and her shipmate Louise. We saw Neil Bauman, wife Theresa, and Sandra (an Oregon Shakespeare Festival coordinator that helped organize the cruise) as we were leaving the restaurant. They gave Robin great, complimentary feedback on her presentation this morning. Lots of attendees have been passing along great reviews to Neil and Theresa.

My morning class was an excellent overview of Adobe CS3 Bridge and Adobe Camera Raw 4, presented by Derrick Story. It convinced me that I should be shooting more photos in the RAW format and using ACR4 more for of my image processing. Fun stuff. It also got me hooked on Photo Merge (automatically stitching together two or more photos into panoramic shots) and HDR photos (High Dynamic Range). Photoshop can combine several photos of the same subject -- each photo shot with a different exposure -- to create one photo that contains a wider range of detail in both shadows and highlights. In other words, instead of setting the exposure to favor either highlights or shadows, you shoot a couple of shots underexposed, a couple overexposed, then let Photoshop combine them and keep the best from each. You end up (in most cases) with a single photo that shows the best of both worlds: highlights with detail and shadows with details.

We docked at Aruba this morning. At noon we walked into town and ate at The Old Fisherman. Not so good. I had fried rubber bands. It was called "calamari" on the menu, but I brought most of it back to the ship to make slingshots and to strap my extra camera batteries together.

Because it was 88 degrees and humid in town -- and because the town just didn't seem very interesting -- we went back to the ship right after lunch. Pat and pal Louise took a tour of the island and said it wasn't very exciting. They did mention seeing a lot of cactus. Sweet Swan of Avon! I sure wish I hadn't missed that!

At 11 PM tonight (Tuesday) we pulled away from the island of Aruba and headed out to sea. Tomorrow morning we arrive in Curacao (pronounced cure-uh-sow, I think), another island in the neighborhood. No classes tomorrow, so we'll probably go ashore and see what's happnin'. Take some photos.

Also, tomorrow I hope to upload a blog from Robin for her take on the cruise and the Shakespeare and MacMania conferences.