Beautiful Lithia Park is located between the Shakespeare Festival complex and a river that flows through donwntown. It's named after the fact that the water contains Lithium. Well, there seems to be some debate about that, but supposedly, if you drink the water from one of the public water fountains in the center of town, you'll notice a strong mineral taste, but probably won't notice any mood stabilizing effects that you were hoping for. So don't cancel your lithium prescription if you have one. 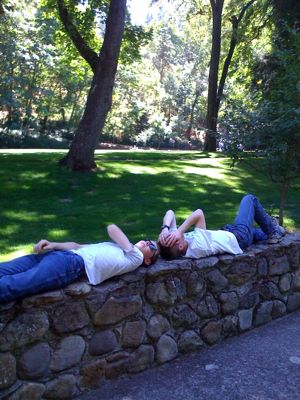 Maybe these guys have been drinking the water in Lithia Park. 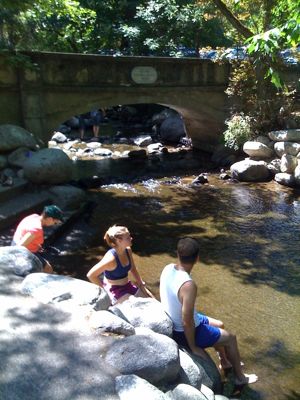 A wading area in Lithia Park.

We saw The Further Adventures of Hedda Gabler this afternoon. Now we're off to see A Midsummer Night's Dream.
Posted by Unknown at 8:40 PM

Friends Carmen and Gregg walked the one block from their hotel to our B&B to meet us for a great breakfast and a leisurely visit before they start the 6 hour drive back to Santa Rosa (North of San Francisco). 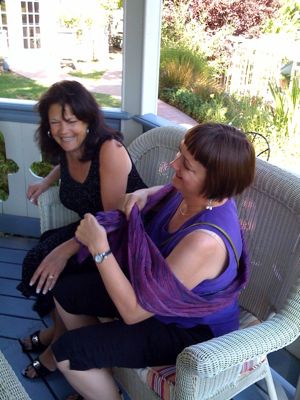 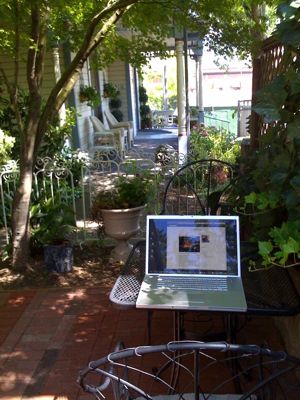 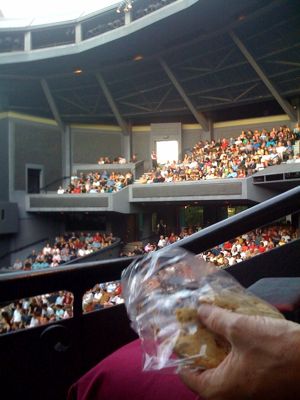 A chocolate chip cookie makes its entrance.
Posted by Unknown at 1:31 PM

Othello and A View From the Bridge 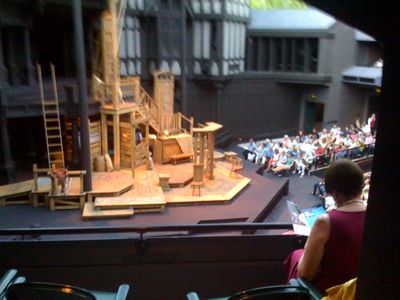 Box seats for the production of A Comedy of Errors.

Last night we enjoyed a great production of Othello from the front row in the outdoor Elizabethan stage last night. Great actors made Iago wonderfully disgusting and Othello disgustingly jealous. Lots of great line deliveries, like Desdemona screaming at the top of her lungs "Kill me tomorrow! In thirty minutes! After one prayer!" as she futilely ran for her life around the stage, trying to escape Othello. The stage lighting and the passion of the two main actors provided a literal shower of spit and sweat across the stage. When the usher had earlier shown us to our seats, she'd said "I hope you don't get spit on." We didn't, but it was close. We also found ourselves cringing in defensive postures in our chairs as sword fights spilled offstage into the audience and metal cups were thrown and kicked in anger. 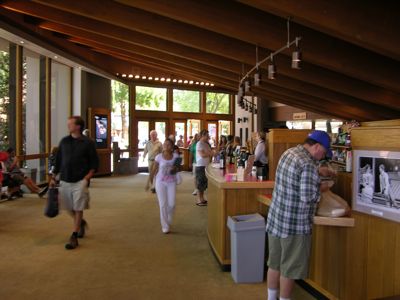 Lobby of the Angus Bowmer Theater, one of three theaters of the Oregon Shakespeare Festival.

We had a horrific experience at the afternoon play (Arthur Miller's A View From The Bridge). Once again, front row seats. It's an intense story of illegal Italian immigrants in New York City. The tension builds for a couple of hours, the main character is dying on stage, and my iPhone, which I powered completely off and put in my jeans pocket, starts ringing. Not really ringing, just playing Zorba the Greek as a ring tone. Somehow, my jeans pocket had pressed against the power button, and our friend Lew was calling to arrange meeting for a drink. I fumbled desperately for the phone, Robin pushed the mute button. Fortunately the volume was on low and just a few people near us realized what was happening. If any of the actors heard it, they didn't let on.

Our friends in other parts of the theater said they didn't hear it. I felt like Othello, realizing what a horrible thing I'd just done. It took about an hour and several glasses of wine at Liquid Assets (below) to put it all behind me. 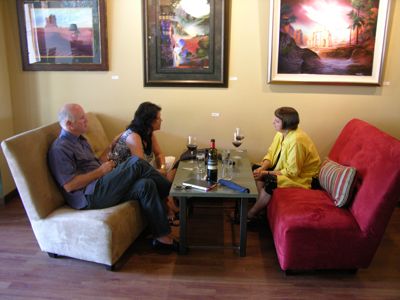