Tomorrow Robin, Maria, and I (not Wally because he's in London tomorrow working as an extra on a movie set) take a bus to Oxford, about an hour away. Not just "a bus," but a very nice bus with free Wi-Fi.

Robin will show us around and point out some of the points of interest she knows. At 5 pm we plan to meet our friend Lynn at Regents College where she teaches, then go to dinner. Regents College is a Baptist school.

In case you didn't know, Oxford is not one big school, but is made up of 38 different colleges. "College town" is pretty much an understatement when you're referring to Oxford. As early as 1096 university teaching was going on here, but they suspect it was actually a little earlier, around 915.

After dinner we have tickets to attend a production of Hamlet at Blackwell Bookshop, a large and famous bookstore for Oxford students. Robin says a stage is placed on top of the bookstore tables and the audience watches from the book stacks area on the second floor. The actors draw the part they will play that evening from a hat just before the play begins. Sounds interesting. Everyone in the audience is asked to bring a prop of some sort. I don't have a clue what that's about, but hey, it's Oxford, for God's sake. It must be cool.

Twelve saints have graduated from Oxford. And that's not even counting the saints that flunked out or got kicked out. Definitely an extraordinary place. 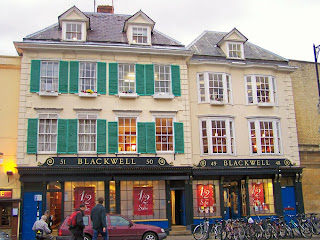 Blackwell Bookshop in Oxford.
Posted by Unknown at 3:51 PM

Why Drawing In Class Is Bad 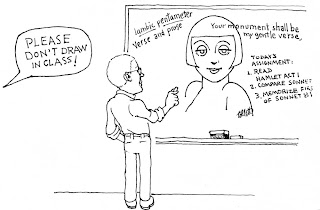 Another sketchbook page from one of Robin's lectures.

Robin's lecture was about the rules to follow when writing a scholarly paper. I listened, and it was very interesting, but the odds of me attempting anything scholarly anytime soon are so slim that I decided I might as well try to bring back some grade school memories of drawing in class... while I listened, of course.