We moved out of our Patio room (at the Winchester House) today, and into the Sunset room on the second floor. 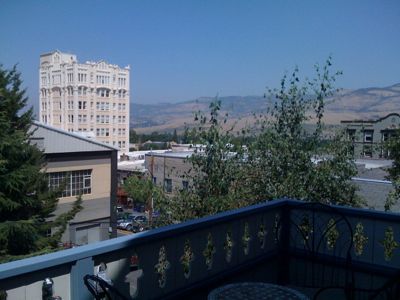 View of the Ashland Springs Hotel from our room's balcony.

As we strolled to the afternoon performance of The Clay Cart, we saw a local in a store window (below). 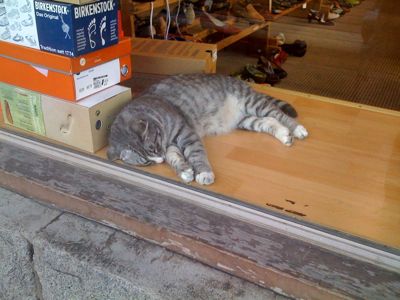 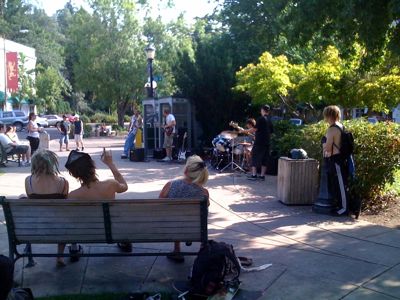 Music on the Plaza. 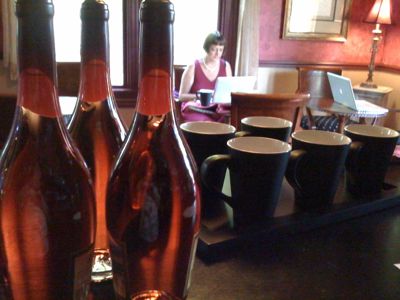 A blogging spot in the Winchester House bar.
Posted by Unknown at 6:48 PM 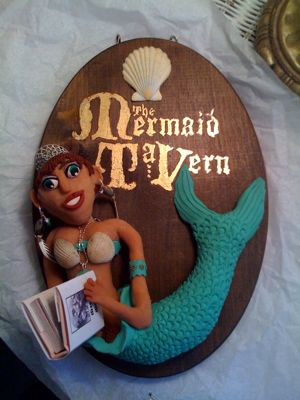 Robin's house is known as The Mermaid Tavern. In Shakespeare's day, the original Mermaid Tavern was on the corner of Friday and Bread Streets in London. All of the notable writers, thinkers, and poets of the day (not including the man named William Shakespeare) met there on the first Friday of every month (on Friday Street) to socialize and discuss politics, literature, and whatever.

Robin visited the location while in London. It's still a pub. It's now named The Seahorse. The current owners had no clue about its illustrious history, but it's interesting that they happened to choose a name that's closely related to the original, even though they didn't realize the original name was The Mermaid Tavern. 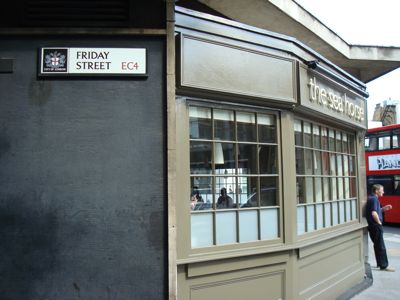 The Friday Street side of the original Mermaid Tavern. 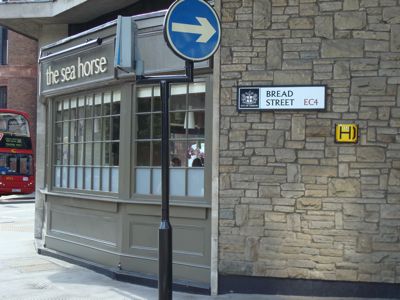 The Bread Street side of The Mermaid Tavern.

A very good play and a really great play

Yesterday afternoon we saw The Further Adventures of Hedda Gabler. The original play Hedda Gabler became a national sensation in 1902 when it was performed on Broadway. The play is, by some, considered to be a female Hamlet. I don't think so (I've seen it on DVD), but suffice it to say it's an important play in the history of theater.

The version performed here is a comedy, based on the concept that fictitious, iconic characters live in a sort of purgatory until they're forgotten by society. Hedda meets other cultural icons from fictitious plays, movies, and TV shows, even Greek myths. Funny and thoughtful. Very entertaining. Great performances, especially by the two stereotypical gay men, and the black "Mammy" from Gone With The Wind.

Last night's performance of A Midsummer Night's Dream was fantastical wondrous (to paraphrase Mary Sidney). The fairies were over-the-top gay men who occasionally broke into disco dance and song. Some of the dialog was spoken as disco songs or as rap music. This was one of the most interesting plays of the week so far.

This afternoon we'll see The Clay Cart (an 8 hour play from India that's been cut down to 3 hours). Tonight performance is Coriolanus. Word is that it's great.