Robin's class was rescheduled from Wednesday to today, to accommodate some student scheduling issues, including a make-up class session for one of the students. While Robin taught classes, I found a quiet spot, did some writing for a couple of hours, then joined her class for the last hour or so. 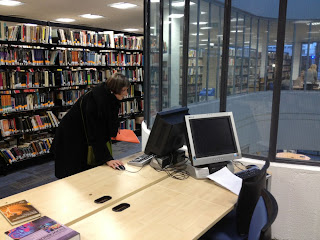 Robin uses one of the library computers after class to look up some Shakespeare books she needs to check out. 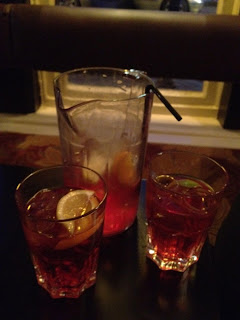 On the way back to the flat, we (Wally, Maria, Robin, & me) stopped at the Metropolitan for dinner, a couple of pitchers of Woo Woo (above) and a couple of pints of cider. 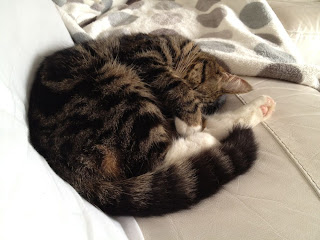 Our occasional cat grabs a nap on the couch. He/she seems to have several apartments lined up and available.

No plans for tomorrow, but Thursday we're going in to London early to visit the Saatchi Gallery and the National Portrait Gallery. The Saatchi is always guaranteed to be an interesting, if not weird, experience. And the National Portrait Gallery has an exhibit of Lucian Freud paintings. Lucian, son of the famous Sigmund Freud, died just last year and was considered the pre-eminent British painter of his time. His paintings are amazing, so we're looking forward to an inspiring visit there.

After visiting the galleries, we have dinner reservations at Ye Olde Cheshire Cheese, a famous pub on Fleet Street. Our friend Lynn, from Oxford, and her son James are meeting us there for dinner. According to Wikipedia "this pub continues to attract interest due to the curious lack of natural lighting inside which generates its own gloomy charm."

Some of the "regulars" at the Cheshire Cheese were Charles Dickens, Alfred Tennyson, Mark Twain, and Sir Arthur Conan Doyle. It's assumed that Samuel Johnson  must have been a regular here also, because he lived nearby. In 1755, after nine years of work, Samuel Johnson published A Dictionary of the English Language.

Speaking of Samuel Johnson, after dinner at Ye Olde Cheshire Cheese we're taking a tour of his nearby house. Sounds like there will be plenty of photo ops on Thursday.