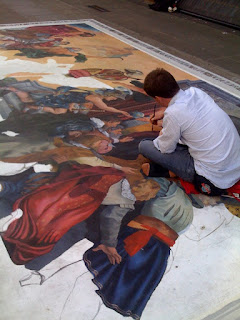 Near the Millennium Bridge.
Posted by Unknown at 5:19 PM

Ship in a bottle 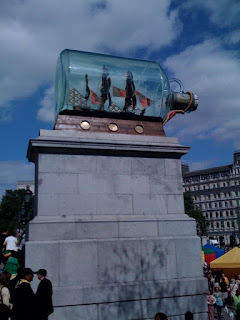 Trafalgar Square, outside the National Gallery.
Posted by Unknown at 5:18 PM This morning we met Robin's cousin, Danny, and his family for breakfast at a nearby Hilton. They've been staying in the English countryside and are taking the chunnel to Europe for more sightseeing.

This afternoon we went to the National Portrait Gallery to see lots of great portraits, including The Tudors and a contemporary collection.

Next we made our way across town to the St. Paul tube station where we crossed the Thames on the Millennium pedestrian bridge to the Globe Theater neighborhood. After a fast, delicious dinner at Tas Pide, a Turkish restaurant across the street from the globe, we went to see Macbeth at the Globe. A very good production, viiolent, bloody, and lots of screaming. Lots of the Groundlings (the standing room audience around the stage) had to stick their heads thru holes in a fabric surrounding the stage. Actors and musicians occasionally appeared thru a hole in the cloth.

Getting ready for a big day tomorrow: a trip to Greenwich and an after hours drawing session at the Tate Modern tomorrow night. 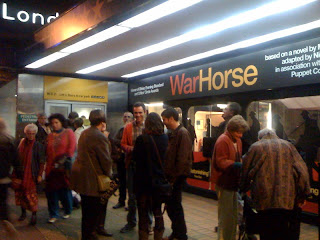 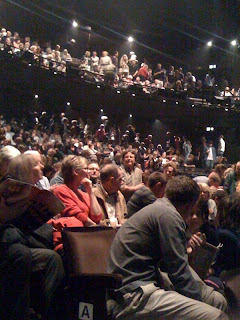 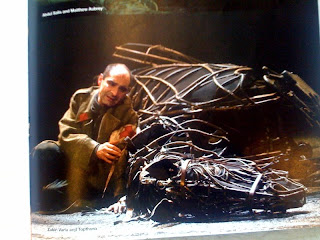 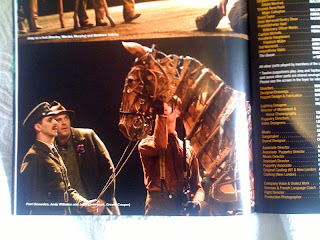 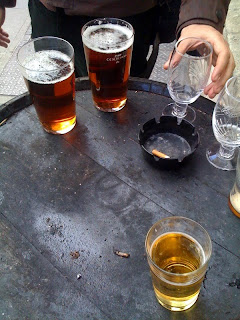 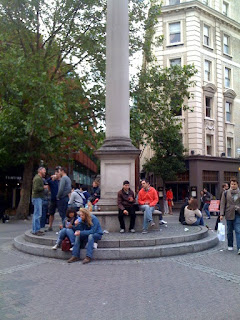 When we left the Saatchi Gallery Robin, Scarlett, and Ela jumped in a taxi to hurry to their Afternoon Tea reservation at the Brown Hotel, well known among Afternoon Tea aficionados.

JohnD, Jay, and I started walking east towards Buckingham Palace, on to the theater district where we had arranged to meet the ladies later to see War Horse.

On the way we stopped at a couple of pubs to sample the beer. In the bottom photo Jay and JohnD enjoy relaxing in the middle of the street with a beer. Just try to remember to return your glass to the pub across the street.

Top photo: outside another pub, a beer barrel doubles as a table and ash tray. Standing around outside the pub and sipping beer while socializing seems to be the thing to do. Kinda like Facebook, but more like Face-pub. 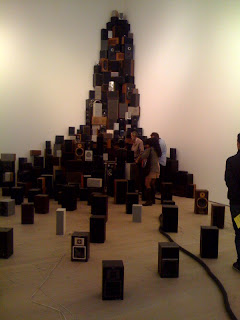 Another interesting room in the Saatchi Gallery is filled with speakers of all sorts, creating a tower of speakers in the back corner of the room. Hidden behind the some of the speakers, where people are standing, is a player piano. The large tube on the floor slithers as some sort of energy is fed to the piano, making weird, unpleasant electronic sounds. In my opinion This piece just barely misses the mark. If all those speakers had been blaring any kind of real music (Queen, Devo, TransSiberian Orchestra, Beethoven) I would have bought it.
Posted by Unknown at 5:46 AM 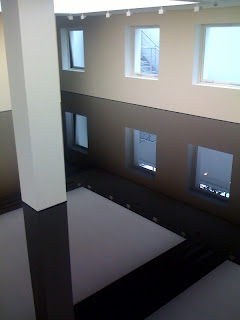 One of my favorite pieces at the Saatchi is a large room half filled with oil.

Like I said, art or tragic accident? It's hard to tell, but since this piece was also at the gallery's previous location, I'm guessing "art." 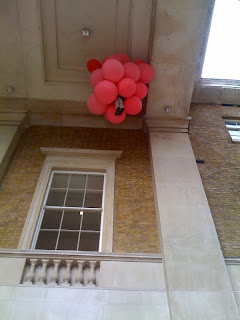 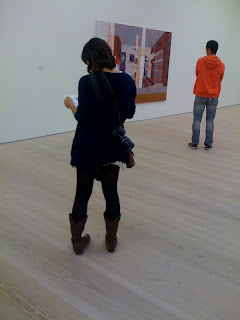 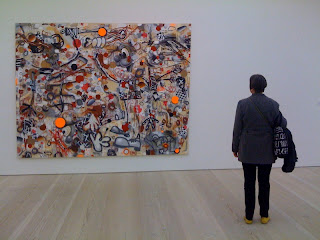 (Note: In case you haven't noticed before, click on an image to show a larger version.)

Our former Turkish exchange student from Istanbul and his wife, Ela, also from Istanbul, drove four hours to London from Manchester to spend the day with us.
We Tubed and walked to the Saatchi Gallery, stopping for lunch at an Italian in the Kensington area of London.

You never know how brilliant or weird the current Saatchi exhibit will be. Sometimes you just don't know if you're looking at art or a tragic accident. In the case of the art piece at the top of the page, I think it's art, and I like it. If it's not art, someone call 911.