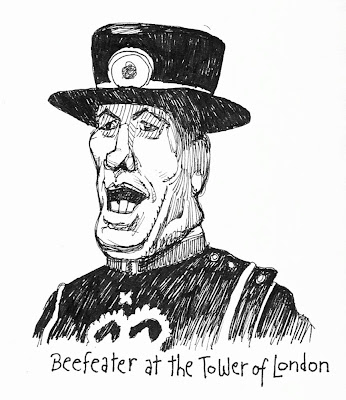 It's not entirely clear why the Yeomen Warders are called Beefeaters. The most popular explanation seems to be that they were regularly given a very large portion of beef as part of their pay and rations. Or maybe they had something against Fisheaters. 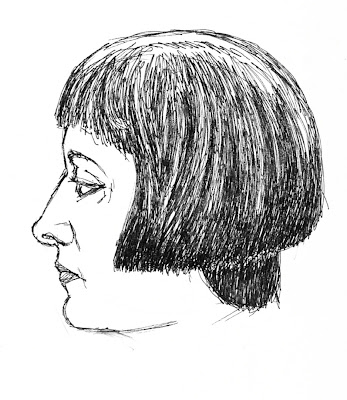 Felt tip pen study. If you call your class drawing a "study," you're an artist. If you call it a "drawing," you get kicked out of class. I only do studies. While learning about Shakespeare. 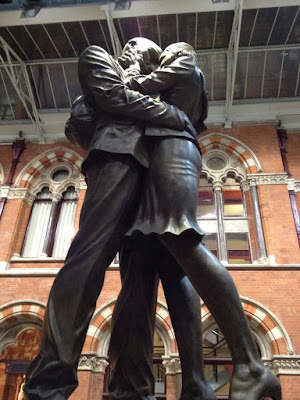 No need to feel shy about kissing your sweetheart goodbye at the train station. It's encouraged here. 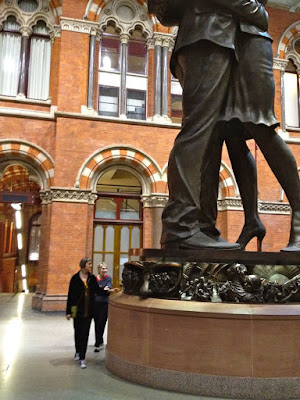 Great art at St. Pancras train station. Just to the right, out of view, is an interior entrance to the Booking Office Restaurant in the St. Pancras Hotel. 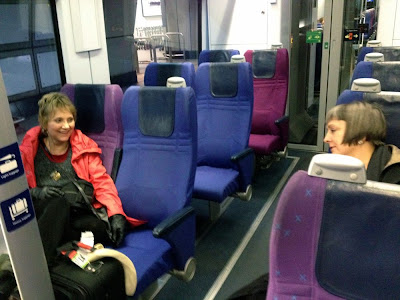 Girlfriends chat on the Heathrow Express. 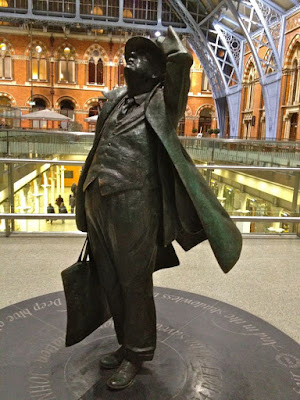 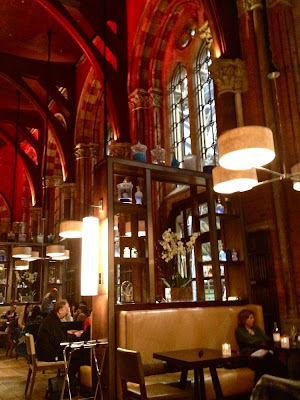 The Booking Office Restaurant. The hotel says it's casual dining, but it seemed pretty elegant to me. We had a delicious late-night dinner here. 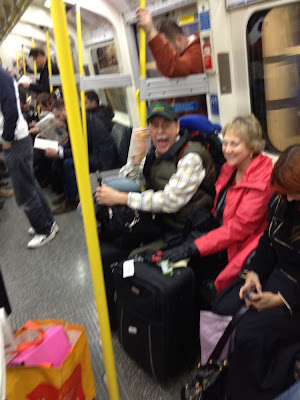 Jamie gets excited when we ride on the Tube. Stay calm and carry on. 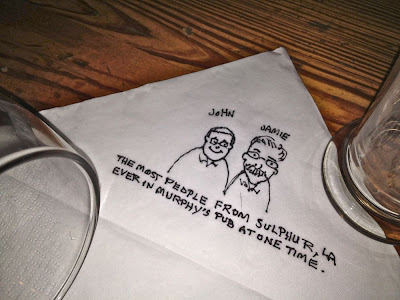 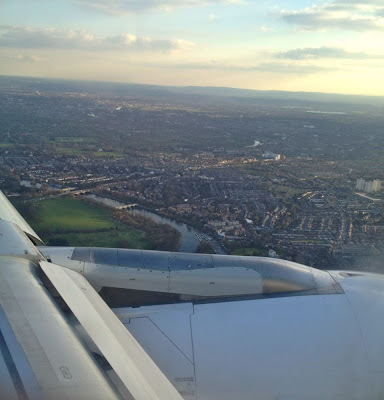 Just stating the obvious for any UK blog readers that haven't been to California or Texas.
Posted by Unknown at 9:30 AM 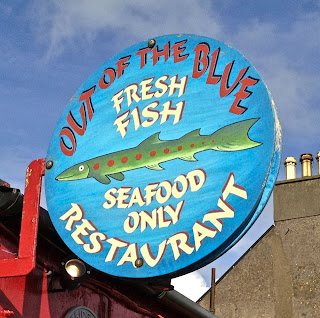 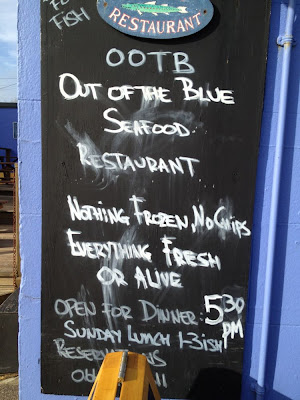 As our time in London with Jamie and Carla counted down, we walked along the River Thames from the Millennium Bridge to the London Eye. Bad idea. Especially if you've already been walking and standing all day. But what the craic, we're young! No bother mate. Stay calm and carry on. Brilliant! That's not cricket. You alright? OK, now I'm running out of colloquialisms. 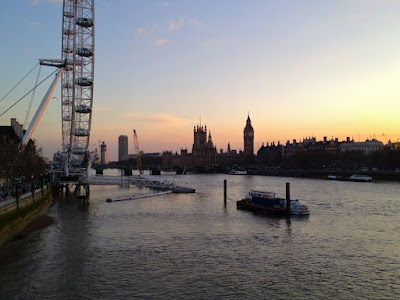 The London Eye, after our ride, shot from the Jubilee Bridge as we walk to the train station on the north bank of the Thames. 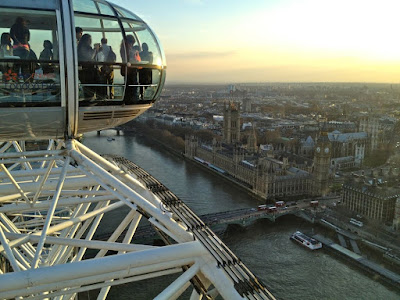 Nice views of London and the Thames. 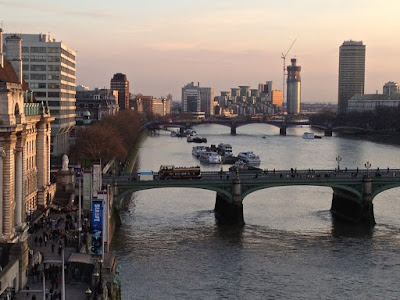 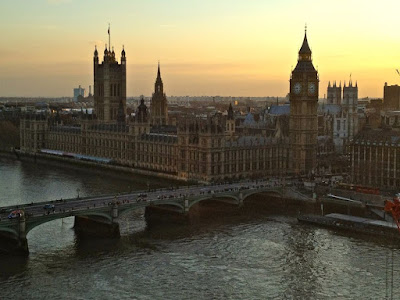 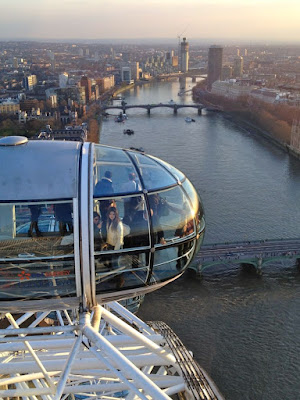 The London Eye is 443 feet tall, each pod can hold 25 people, and one rotation takes 30 minutes. 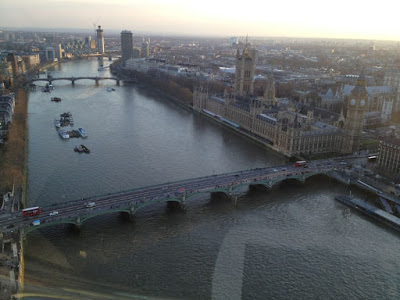 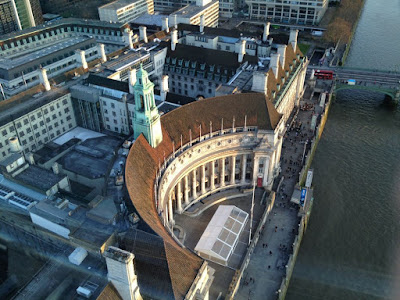 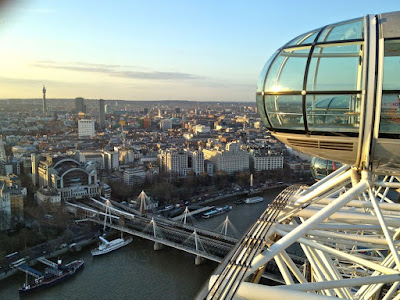 The Jubilee Bridge and the train station we'll walk to in order to catch a Tube train Piccadilly Circus so we can get to our theater on time. When we arrived at the Pinter Theatre, we first had dinner just across the street at a vegetarian Indian restaurant. We gulped down the delicious meal, ran across the street and got to our seats a couple of minutes before the curtain went up.

After another night at the St. Pancras Hotel, we walked to the train station next door, said goodbye to Jamie and Carla, and pointed them in the direction of the Piccadilly Line that would take them to Paddington Station where they would catch the Heathrow Express to the airport. Yikes, Carla couldn't find her Heathrow Express return ticket. They kept calm and carried on, figuring they'd buy another one-way ticket for the Express train when they got to Paddington.

Robin and I carried on to our train platform, chatting with each other about what a great birthday trip it had been. As the next train pulled up to the platform Robin gasped "OhMyGawd! We put them on the Piccadilly Line and it doesn't go to Paddington station (where they have to catch the Heathrow Express)!"

"They're out of money! They put their credit cards on hold after he lost his wallet at Heathrow! Their Oyster Cards (pre-paid train cards) are out of money! ZOUNDS! What have we done to them?!"

We hoped they'd notice that if they just stayed on the Piccadilly line that it would eventually end up at Heathrow. Thankfully, that's what they did, and they made their flight. When we got to our apartment in Uxbridge I started calling their mobile number and home number in Kentucky, hoping to reach them or their house-sitter, fearing they were stuck somewhere in London without cash or credit cards. I had forgotten to give them Robin's UK mobile number or our apartment phone number.

About 24 hours later we finally got email from them, saying they'd just gotten home after further hassles and delays and cancelled flights in the USA. This trip turned out to be much more memorable than they bargained for.

SLAINTE! to them for the epic, 6-day birthday event. And for finding their way home.
Posted by Unknown at 5:08 AM