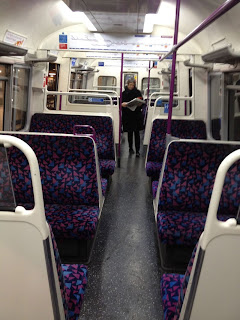 Sometimes the choice of seating on the train is unlimited. 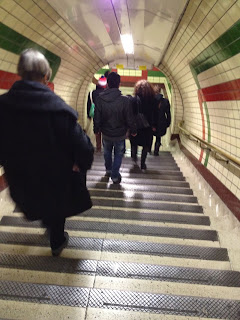 Making a train connection at the Baker Street Station sends us deeper underground. The really deep tunnels have escalators. If you have a fear of escalators, you're outta luck. 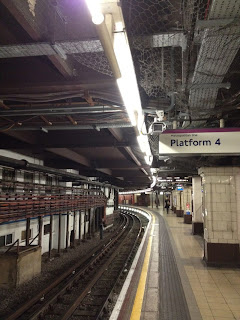 Waiting for the train. Not very exciting. Unless you're from Santa Fe where this kind of fun is very limited. 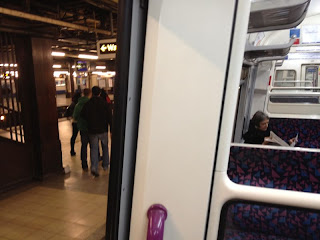 Robin reads while I wait for the train doors to close. 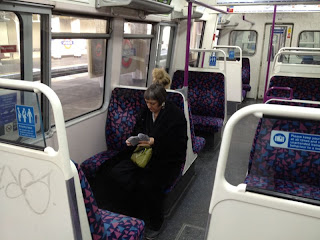 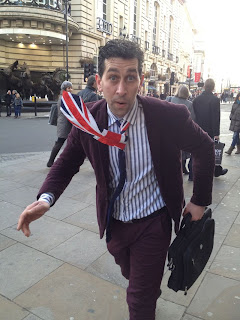 This guy is a street artist who stands there like a statue. His tie is permanently frozen in the wind-blown shape. Very cool. I put a pound in his bucket, took a photo, and said thanks. He winked. 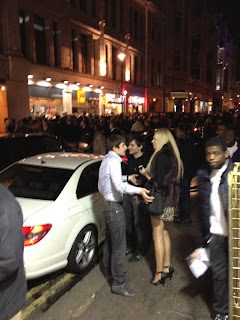 It's almost midnight and the mass of hundreds of people in the background are all standing in line to get in to some hot, happening club. Probably some sort of vampire hangout. Everyone in the crowd in the background is young and wearing black. Most of the young women are wearing black miniskirts. I lucked into a shot of a young one being separated out from the colony by a predator. I hope she's OK... I'm sure if things turn bad, the other vampires will realize this guy is not wearing black and will teach him not to mess with the undead. 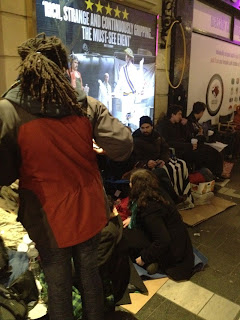 People waiting in line for a ticket to tomorrow's last performances of the "must-see" show Jerusalem. 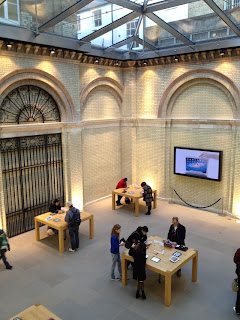 One of the rooms in the Covent Garden Apple Store. Most of the store was very busy, but this area was very quiet. 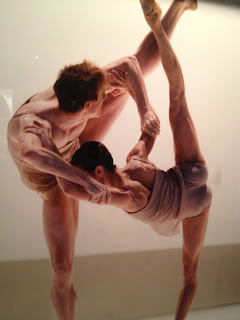 I like to wear a dark wig when we do our ballet workouts. Just kidding, it's a poster in the Royal Opera House, also in Covent Garden. 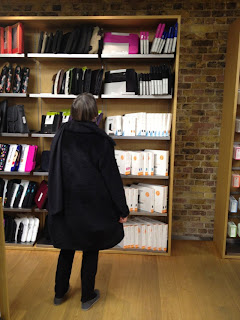 Robin picks out a protective sleeve for her MacBook Air laptop at the Apple Store. 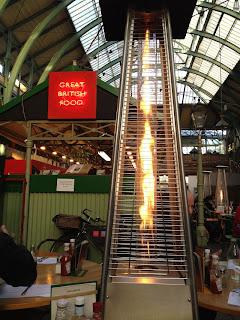 A food court at Covent Garden. I had the fish finger sandwich. Highly not-recommended. 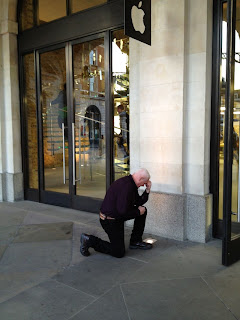 What do you do when you visit an Apple Shrine? Tebow, of course. 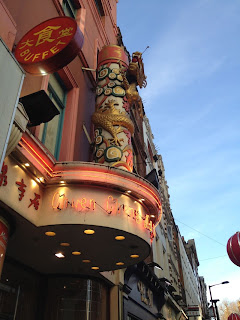 China Town is adjacent to the Theatre District. 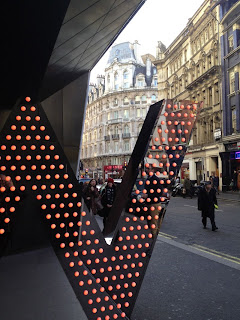 Before meeting Wally and Maria for pre-theater dinner, we dropped in to the W bar for a really expensive drink.
Posted by Unknown at 10:08 AM

What a great night. We met Wally and Maria for an early dinner at an Italian restaurant across the street from the Apollo Theatre. After dinner they hiked over to another theater to see Shrek (the musical). 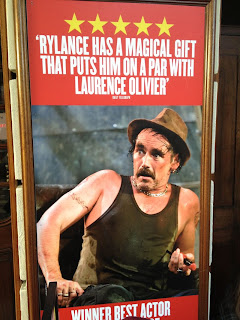 Very high praise. As I shot this photo, a young man waiting in line for a Saturday matinee ticket said "Just 19 hours to go!" 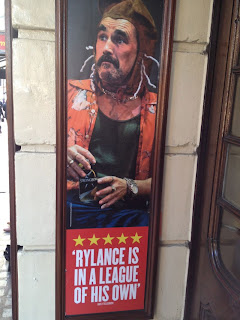 Unless I misunderstand, this review puts Rylance above Olivier. 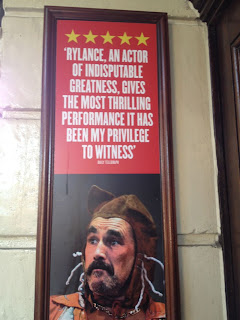 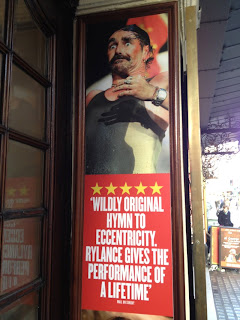 Hymn to eccentricity. I was just getting ready to say that. 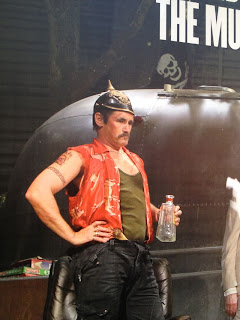 I'm trying to convince myself I actually saw this guy play Olivia in Twelfth Night. And believed it.
Interesting thing about that performance of Twelfth Night at the Chicago Shakespeare Theater): before the play started, the  actors brought dressing tables and mirrors onto the stage, then dressed and put on makeup onstage. And I still believed he was Olivia.
Bearing in mind that I haven’t seen a great number of stage performances, Mark Rylance’s performance as Rooster in Jerusalem was the most impressive I’ve ever seen.
Great writing certainly helped, but this guy was literally covered in sweat (real) and blood (fake) by the end of the play. Either he was totally exhausted at the end of the play, or he’s even better than I thought.
The set is a forested area of the country, with Rooster’s dilapidated Airstream trailer taking up most of the stage. Wild parties with drugs and alcohol happen there every night with his posse of both young and older friends. Rooster is a rascal without any redeeming qualities other than being an outrageously shameless storyteller.
At one point a friend confronts Rooster about his story that he once met a 90-foot Giant who claimed to have built Stonehenge.
“You met a 90-foot giant who built Stonehenge?”
“Yes, he said the weather was going to be dry all Spring, but he was full of crap, it rained like Hell all Spring. He said he built Stonehenge, but he could’ve lied about that.”
A three hour play with two intermissions, it was a memorable evening to say the least. I suspect I’m going to have a very hard time getting Rooster out of my head. Such as the opening scene when Rooster stumbles out of his Airstream trailer, totally hung over, turns on heavy rock music, stumbles and dances over to a metal water trough, puts a hand on each side and does a hand stand with his head under water (ice water) to sober up. Then he dances/stumbles over to a blender, pours in a container of milk, an egg, some sort of clear liquid from a vodka or gin bottle, adds some kind of powder, then chugs the entire concoction in several gulps. Holy crap. This is the first two minutes.
When Wally and Maria saw the performance on New Year’s Eve, Rylance ended the curtain call by leading the audience in singing Auld Lang Syne.
At the end of last night’s curtain calls, Rylance gave a very nice acknowledgment to the young boy that played his son, praising his emotional intensity “that is golden to fellow actors.”
A prince of a guy. 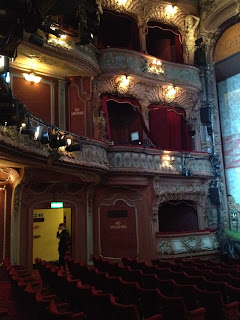