Last minute prep for our trip gets squeezed in today. Like your usual last minute radio interview. Craig Barnes, noted trial lawyer/author/playwright/radio-show-host (KSFR in Santa Fe) invited Robin to be a guest on his new show "Our Times." The interview will air in mid-October and should also be available on the Internet. I video taped it and will try to post it soon. Details in a later blog.

Below: Robin and Craig hold a pre-interview meeting in the Santa Fe Community College courtyard. 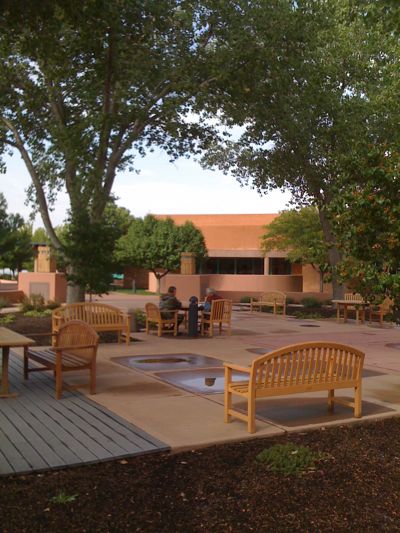 During preparations for our trip to London, it occurred to me that New Mexico could really expand public rail transportation, now that the Railrunner Express is running between Los Lunas, Albuquerque, and Santa Fe. For just a few billion more dollars, we could build an underground rail system to connect many of the smaller towns and villages to Santa Fe, the state capitol.

While engineers are working on the easy part (the tube map), I've already developed signage for some parts of the system (shown below). When I return from London, I'll try to set up a meeting with Governor Richardson, who made the current rail system (fabulous but limited) a reality. 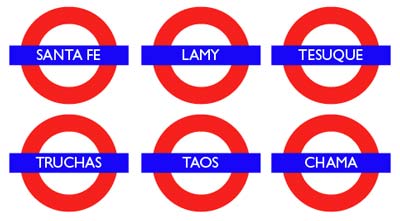 If this plan doesn't fly, we can go to Plan B: put tube signs in all towns so it looks like we have an underground rail system. That will encourage people to visit when they see photos or tourism ads that include tube signs. T-shirt and coffee mug sales should cover the cost of the signs.