Taksim is the name of a street, and refers to a general area of Istanbul, located on the opposite side of the Golden Horn, a peninsula of water that divides the city. Our hotel is in the old city section, Sultanahmet, named for a Sultan whose name was Ahmet. Sultanahmet is where many of the tourist attractions are: The Blue Mosque (it's not blue), Hagia Sofia (the oldest and most famous mosque), Topkapi Museum, the Grand Bazaar, and much more.

Our Turkish son Jay lives and works in Taksim. It's a lively place full of cafes, night life, and lots of people. Even more lots of young people. A very interesting part of Istanbul that we never would have thought about exploring if Jay hadn't taken us there. 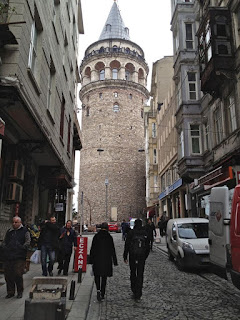 Jay and Robin approach the Galata Tower. It's an ancient tower that was first built out of wood in the first century, then later rebuilt with stone in 1453. 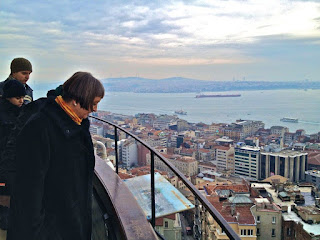 360 degree views of Istanbul. Does anyone else have a fear of dropping their iPhone when taking photos in a place like this? 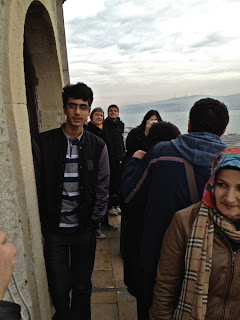 Robin and Jay on the observation deck. 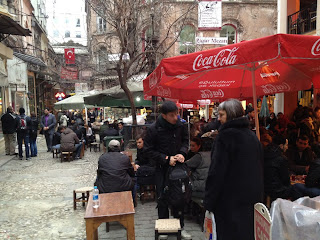 Lots of outdoor cafes in the Taksim area. This is one of the most popular ones, 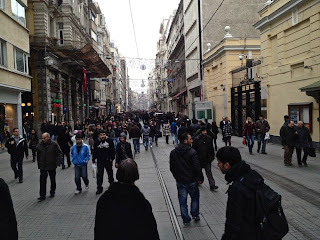 Taksim is a wide street with lots of pedestrian traffic. Every once in a while a car tries to make it across, and occasionally a trolley comes down the tracks, but it's mostly pedestrians. This photo was taken in the afternoon before it got crowded. 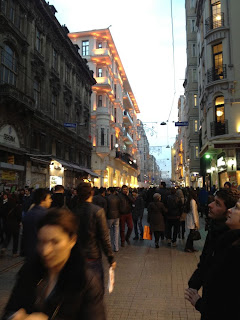 Later in the afternoon, the crowds get thicker. After walking along Taksim, having Turkish Tea at the outdoor coffee shop, having lunch at a Turkish cafe, we went to Jay's apartment for a visit then took a taxi to our hotel. Jay went back to Taksim to meet friends and have an Istanbul Saturday night.
Posted by Unknown at 2:34 PM 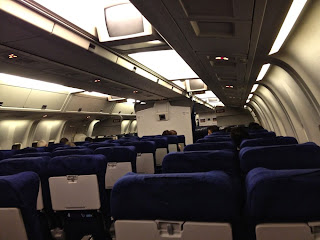 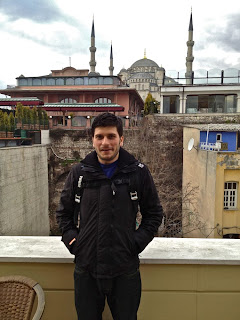 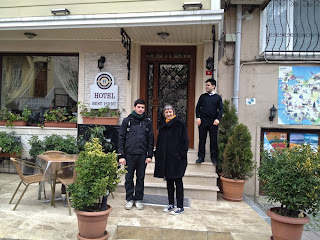