While I post a few more photos, Robin is directing a reading of As You Like it in the Hudson Room. 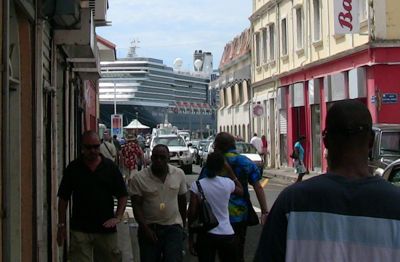 I just wish they could dock the ship a little closer to town. How hard could that be? 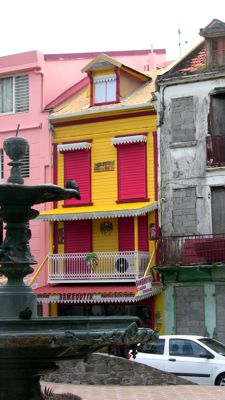 I'm not sure what they have against windows here, but if they like the faux-window look, it works just
fine for me. 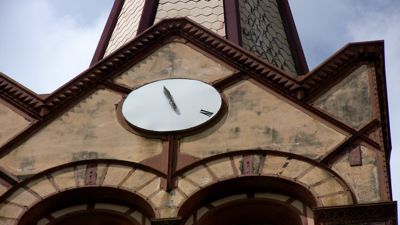 I really like this clock. It kind of makes you stop and think. About what the bleep happened to the rest of the clock's numbers. 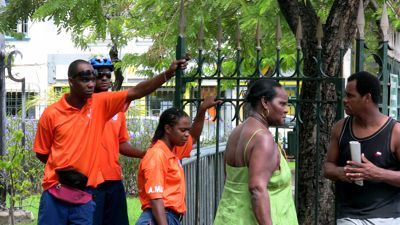 These people are Agents de Urban Mediators. That's what it says on the back of their bright orange shirts. If you need some urban mediation (like if the numerals on your clock are missing), these agents will handle it. I'm just guessing.
Posted by Unknown at 3:01 PM

Columbus was here in the early 1500s. It says so on the cruise ship daily newsletter. As far as I can tell, the island is predominantly French now. All signs are in French and there's a French flag flying over the port city, which happens to be named Port de France.

From the ship, it's a beautifully charming island paradise with gayly colored homes and buildings covering the steep hillsides (below). Ah, those carefree creole islanders really know how to live. By the way, if you zoom in close with your camera on those gayly colored hillside homes of carefree island natives (2nd photo down below), they sometimes lose just a smidgen of their charm. But hey, the important thing is they look good from the ship, especially if you need glasses - like most of us on the ship do. 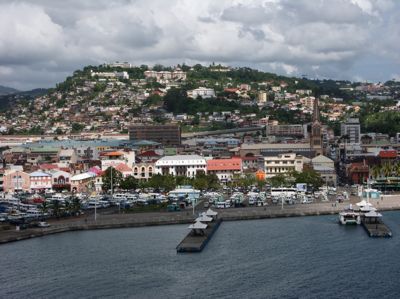 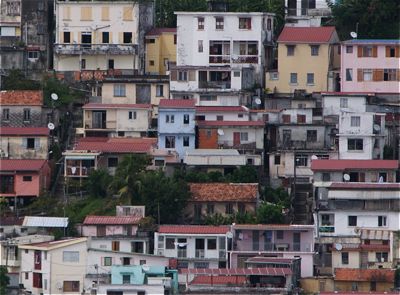 A closer view of Port de France.
Posted by Unknown at 2:22 PM