Get Thee To A Pub

I sat in on one of Robin's classes today. Now I can say I've studied Shakespeare at a London University.

In a Shakespeare play (and in Elizabethan society) characters sometimes refer to each other as "you," and at other times as "thee" or "thou." It's not a careless or casual choice, and the choice of words tells us all sorts of things about the characters and their relationship to each other, both generally speaking and at the moment (characters often change how they address another in the middle of a conversation).

We also learned about The Great Chain of Being, an Elizabethan philosophy in which all things in creation have a hierarchical order. For instance, humans are higher in The Great Chain of Being than animals, and the San Francisco 49ers are higher than the Green Bay Packers. Or something like that. It was interesting and the three hour class went by very fast. And I didn't get scolded for drawing in class.

On the walk back home we stopped by the Metropolitan pub, another Uxbridge pub that reeks of pub-ness and has unusually good food. 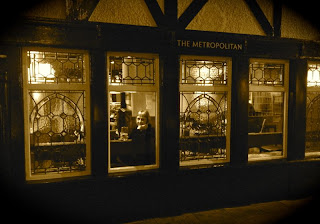 I'm beginning to see why Falstaff liked pubs so much. 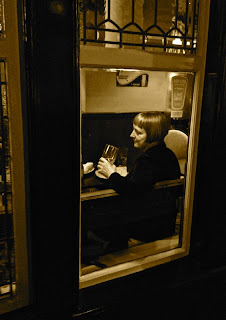 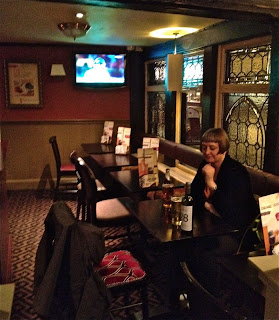 A pleasant place to relax with a pint of cider. And watch the cricket game on TV. The Metropolitan is on a small side street, just a short block from the Uxbridge town centre. Across the street is The Fig Tree pub and the Queens Head pub (dated 1544, but it's believed to be older than that). 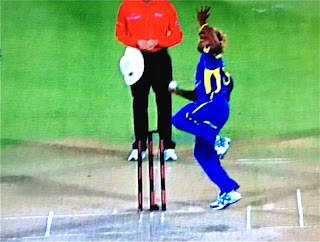 Speaking of cricket, that's a "wicket" to the left of the "bowler." As we ate dinner I looked up and the word "WICKET!" was flashed on the TV screen. That means the bowler (the pitcher) actually hit the wicket that the batsman was trying to protect on the other side of the "pitch." As punishment, the batsman is "dismissed." It's like screaming "Home Run!" or "Touchdown!"
WICKET!! Love it. DISMISSED! Love it.
If you think that's weird, consider this. An inning is called an innings. The "pitch" (where the bowlers, batsmen, and wickets are) is a 22-yard long rectangle. The laws of wicket don't specify the size or shape of the field, but it's usually oval. I noticed the batsmen have face guards on their baseball-style helmets. Why? I'm sure there's a reason. Like maybe they just think NFL-style helmets are cool looking.
Don't get me wrong. If I have a chance to go to a cricket game, I'm going. Just have to make sure it's not a "Test cricket" match which can last up to 5 days. Not kidding. 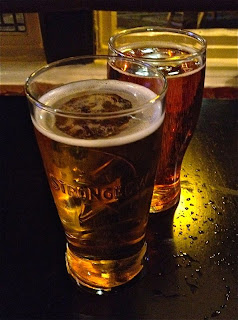 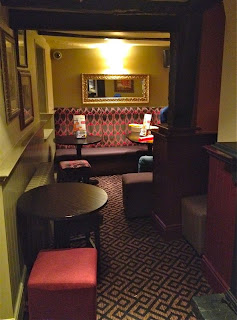 A cozy side room in the pub. 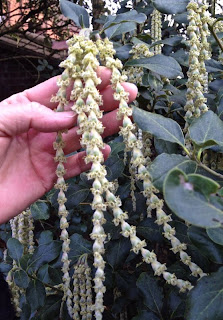 On the walk from downtown Uxbridge to the Brunel campus we pass a tree with unusual blooms. 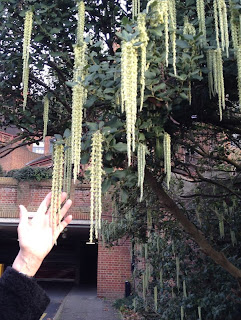