The seas were a bit rough this morning. Enough so that I left breakfast without eating, and slept through Robin's first presentation of Why Read Shakespeare? After a two-hour nap and a magic pill I felt great the rest of the day, even before the seas calmed down.

I forgot to bring the cable that connects my Garmin GPS to my laptop, so below is a pretty bad shot of the GPS device showing our position at the moment (7 PM Saturday night). We're scheduled to sail all night and all day tomorrow before we get to our first port of call (St. Maarten on Monday, November 10). 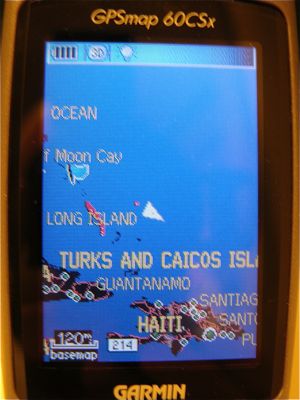 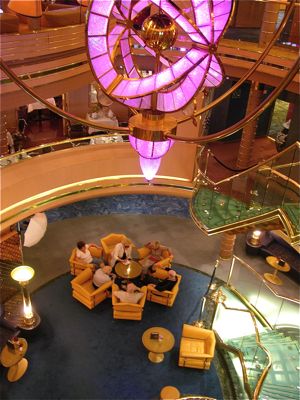 The ship's Atrium.
Posted by Unknown at 5:18 PM

Once again, I'm not kidding. John Tufts, the actor who fabulously played Puck (also known as Robin Goodfellow) in this summer's Oregon Shakespeare Festival production of A Midsummer Night's Dream, is here and I spoke with him.

For me, he defined the role of Puck. So now it's like he's actually disguising himself as a mortal so he can walk around undetected. And it doesn't help that the woman who played Titania, Queen of the fairies, is with him (using the cruise-ship alias and disguise of Christine Albright). 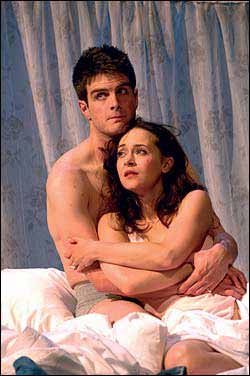 Puck and Titania sometimes disguise themselves as John Tufts and Christine Albright, or even as Romeo and Juliet, as shown above.
Posted by Unknown at 1:01 PM