Tube To Uxbridge, The Flyover, and Oyster 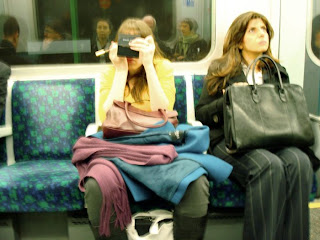 Tomorrow we take the Tube into Uxbridge for Robin's class. Counting the walk to the Hammersmith Tube Station, the train ride, and then the walk from the Uxbridge Station to the Brunel Campus, we'll need close to two hours to get there.
No complaints, though. The Tube is usually pretty entertaining. Like watching someone put on their makeup. Or listening to personal phone conversations. I also like to keep track of how many people in a subway car are not wearing a black suit and black coat. Not many. The lady wearing yellow in the photo is a rare find. 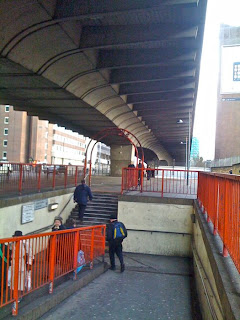 The Hammersmith Flyover was the first elevated highway in London so cars could avoid London traffic. The ramp and stairs lead to an underground tunnel that takes pedestrians under the Flyover and under the local streets to the Broadway shopping mall on the left. Inside the mall is the entrance to the Hammersmith Tube Station. Another pretty darn cool suggestion for Santa Fe traffic problems: flyovers and tunnels. Think about it. 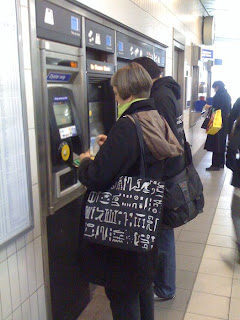 Pre-paid Oyster Cards are cards that you use to tap in and tap out of subway turnstiles. A computer system keeps track of how much credit is on the card. Robin is "topping up" our Oyster cards with a credit card. She knows all the tricks.
Posted by Unknown at 5:24 PM

The 311-Step Program For Fitness

We discovered a new exercise program today: climbing the 311 steps of The Monument. The Monument was built between 1671 and 1677 to commemorate the Great Fire of London (isn't that about the same time they were building mud houses in Santa Fe?). 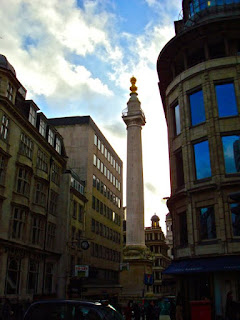 The Monument
The Fire began in a baker's house on Pudding Lane on Sunday, September 2, 1966. It was extinguished on Wednesday, September 5 by smothering the flames with exploding gun powder. The Fire destroyed most of the City, including St Paul's Cathedral. 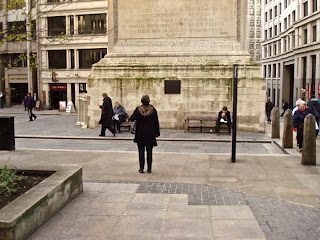 Robin contemplates The Fire, The Monument, and The Climb.
Sir Christopher Wren, a famous architect and Surveyor General to King Charles II and also in charge of rebuilding St Paul's Cathedral, along with his friend Dr Robert Hooke, designed the Monument. It's the tallest free-standing column in the world, measures 160 feet to the viewing platform, 202 feet including the gilded torch on top. There are 311 steps to the viewing platform. The 202 foot height is the same as the distance between the base of the Monument and the site on Pudding Lane where the fire began. 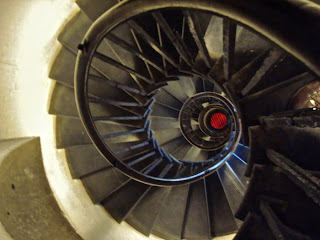 Looking down the stairs in the interior of The Monument. Only 200 more steps to go.
The viewing platform was originally open to unobstructed views, but in the 1800s The Monument became so popular as a suicide spot that it was necessary to install a netting of steel cables. 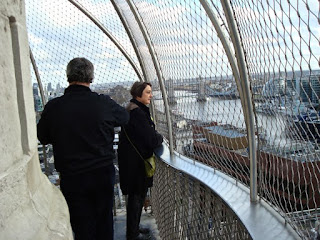 Checking out the views of London. The Tower Bridge is in the background.
I think this Monument thing would work well on the Plaza in Santa Fe. Views of the Santa Fe River and Acequia Madre. Awesome. 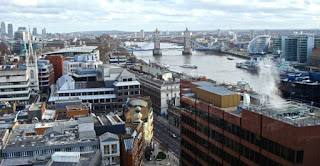 The Thames and Tower Bridge. 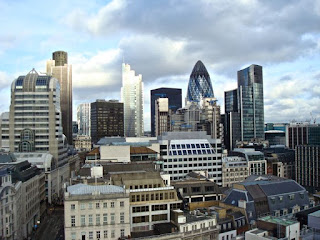 View from The Monument, looking North. 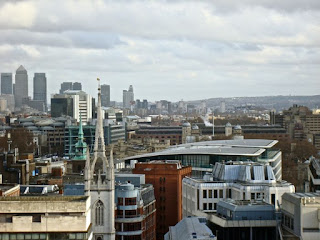 Barely visible and dwarfed by most other buildings, some of the walls and towers of the famed Tower of London can be seen behind the twin curved roof tops in the photo above.
Posted by Unknown at 3:01 PM

On the way home from the Brompton Cemetery we decided to try one of our neighborhood restaurants, Ottoman, "Authentic Turkish Cuisine." The atmosphere was nice and the food was great. Robin says the cacik (pronounced jajeek) was the best she's ever had. And she's tried more cacik than anyone I know. Other than Jay, our Turkish exchange student from Istanbul. On second thought, I think maybe he preferred green chile enchiladas. 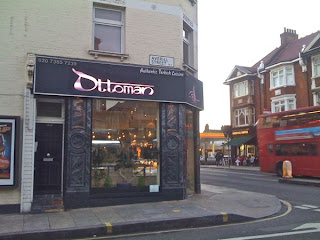 From Ottoman's it's just a short bus ride to Starbucks where we had a latte before taking the five-minute walk home. Actually, even though I wanted to take the bus to Starbucks, Robin insisted that we walk, since you can see Starbucks (green awning) in this photo. But the bus looks fun. 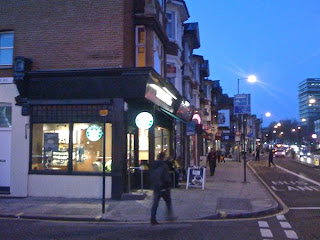 Another view of the neighborhood and Starbucks. For those of you who are fans of Lillie Langtry, we're also close to The Lillie Langtry pub. I'll give you a report on that place as soon as possible. I'll ask if they've ever heard of Judge Roy Bean.
Today our mission is to climb The Monument, the tall tower that marks the spot where The Great Fire of London started. Details soon.
Posted by Unknown at 5:10 AM