We spent the entire day in our B&B room, working on real projects with deadlines. But that’s not the only Wicked part.
This evening we took a bus to the West End Theatre District and the Apollo Victoria Theatre, to see Wicked, the story of a friendship between two girls who first meet as sorcery students and end up in Oz to fulfill their destinies as Glinda The Good and the Wicked Witch of the West.
It was a fun plot, great singing, music, and staging, plus fabulous lighting, fascinating set design, and cramped seating that makes coach seating on an international flight look roomy. But that didn’t detract from the fun.

Robin says it was good but doesn’t compare to The Lion King, so she has to add that one to the list. Wicked! 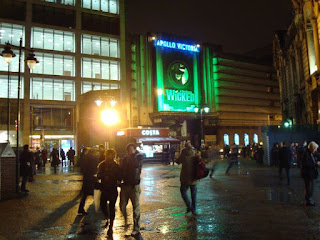 Wicked has been playing here since 2006. I thought maybe I'd seen it at the Yucca Drive-In, but I guess I'm getting it confused with an X-rated movie. 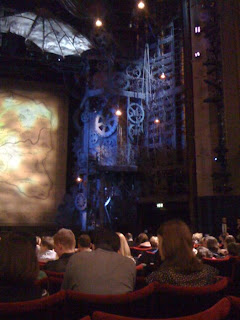 The stage with curtain down and some of the stage-right set showing. 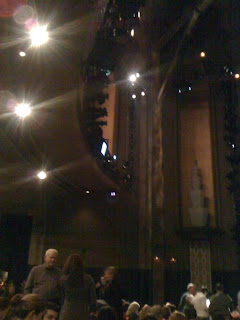 On the face of the balcony, both left and right sides, monitors were mounted that could be seen by actors on the stage. The monitor showed a closeup of the conductor in the orchestra pit, directing the music. 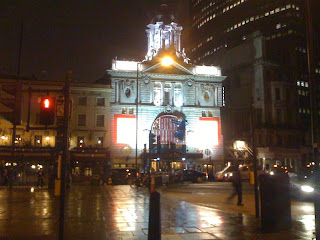 Another theatre in the next block, with another long-running production, Billy Elliot.
Posted by Unknown at 5:37 PM