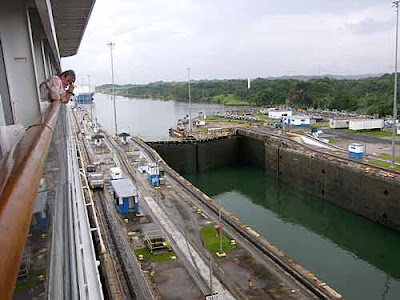 Louise inspects the first set of locks of the Panama Canal.

After dinner last night we went to the Crow's Nest bar for a drink. We sat at the bar and made friends with Lee from Choctaw, Oklahoma. He's a stand up comedian and his show is tonight. It should be good because he was pretty funny at the bar, even though he tries not to be funny when he's not being paid for it. Several times I had to remind him he'd just given us a freebie.

The great window views from the Crow's Nest were showing a lightning storm on the horizon. Back at the room, I went on the balcony to check the weather and watch the lightning. Several flocks of over 100 birds (large and small, mostly white) were flying circles around the ship. Maybe they were running from the storm and looking for shelter. We watched them for about 30 minutes, then went inside. I was watching TV and Robin was working on her presentations at the desk. Suddenly there was a knock at the balcony door. Actually it was a thud. A big bird had flown into the glass door and was walking around on the balcony. It flew off before I could unpack the shotgun (just kidding).

Around 6:00 am this morning we woke to the Captain's announcement that we were entering the Panama Canal locks. We watched the process from our balcony. Shot some video. Took photos. This series of locks put us in Gatun Lake, where we're anchored for the day. Adventurous people like Robin's mother have left the ship for a train ride or other various shore excursions. Robin wanted to stay onboard and prepare for tomorrow's presentations. I decided to do the shore excursion thing on my very next trip here. This enables me to spend more quality time with my computer and to practice some of the Mac stuff I've been learning, like processing HDR images (High Dynamic Range) in Photoshop CS3.

I woke up feeling guilty about poking fun at the predominant age demographic on this ship. If we're lucky enough, we all get older and a little less athletic. So, sincere apologies to anyone who might be offended by insensitive or cruel attempts at humor. Really. I mean it.

However, if the one or two real zombies onboard mess with me, I'm gonna blog about it.