Saturday Night on the Couch 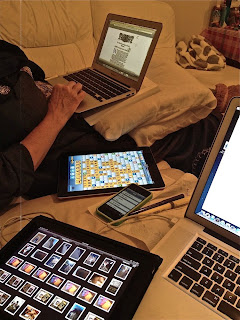 Gloomy charm. That's how Wikipedia described this pub. Robin, Lynn, and I agree. We've never found gloom so charming. It's assumed that Samuel Johnson must have frequented Cheshire Cheese, since it's just a minute or two walk away.

There's a restaurant room across the hall from the bar, but it's slower so we ordered food and ciders from the bar. The food was delicious (Cottage Pie and two Steak & Ale Pies).

We're definitely going back for some more gloomy charm and food before this trip is over. 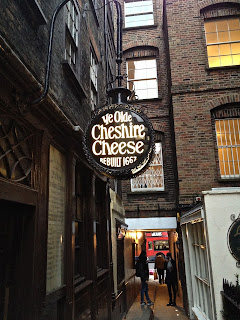 Ye Olde Cheshire Cheese, rebuilt in 1667, after the Great Fire. So this place is pretty new. The Templar Knights wouldn't even recognize this new place, I suppose. 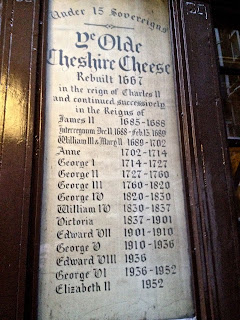 A plaque next to the front door lists all 15 Sovereigns that have come and gone during the Cheshire Cheese's reign. I'll bet lots of Kings heard about this place and wanted to go there, but the Queen wouldn't let him. 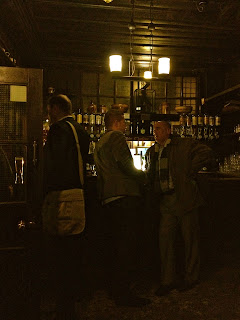 This place is a warren of rooms, stairs, and hallways. I found three bars, don't know if I found them all. This is first bar you find when you come in. It's the best one because its the gloomiest. 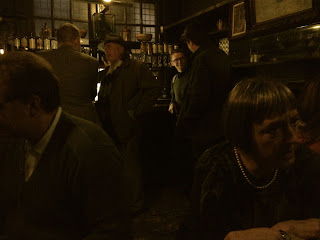 Noted designers, writers, and scholars hang out here. It's pretty dark in here, but I think I see all three on the right. 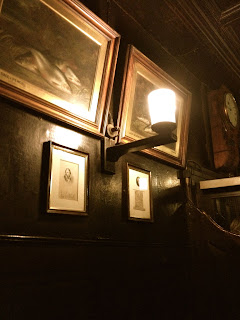 A gloomy wall next to our gloomy table. 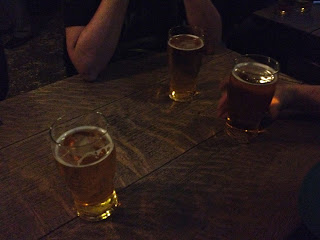 Gloomy cider on our gloomy table. I mean that in a good way. 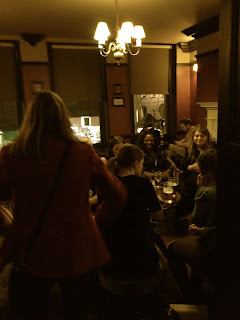 A room upstairs. Looks like a popular place, if you're into light and un-gloomy stuff like that. 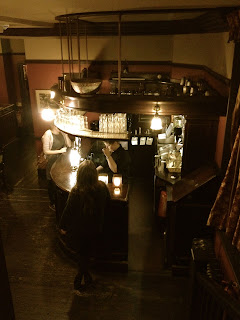 Go up some stairs, around the corner, then down some other stairs, and you're at this bar.
Posted by Unknown at 12:10 PM

Samuel Johnson wrote A Dictionary of the English Language (published in 1755).

He was "arguably the most distinguished man of letters in English history." Among his many literary accomplishments, he wrote an influential annotated edition of Shakespeare's plays.

He had six scribes working for him. He thought it would take three years. It took nine years. Two of the scribes died before it was finished. He lived in this house while he worked on the project, and continued to live here until he died in 1784.

We spent a couple of hours visiting each room in the 4-story house. The man at the entrance desk said everything was 70% original, with some necessary restoration work. All the floors, for example, have been replaced with pine wood planks from America. Of course, in London when they say it was restored, they might mean four hundred years ago.

Lord Chesterfield had promised to be Johnson's patron, helping him with expenses for the dictionary project, but never did anything for Johnson. Near the completion of the project, after 9 years of hardship, Chesterfield attempted to assert himself into the picture. Johnson's reply is one of the most famous of his letters (shown in part, below):


Seven years, my lord, have now passed, since I waited in your outward rooms, or was repulsed from your door; during which time I have been pushing on my work through difficulties, of which it is useless to complain, and have brought it, at last, to the verge of publication, without one act of assistance, one word of encouragement, or one smile of favour. Such treatment I did not expect, for I never had a patron before.
Is not a patron my lord, one who looks with unconcern on a man struggling for life in the water, and, when he has reached ground, encumbers him with help.

Pretty eloquent for a "F*** You" letter. I love this guy.

I don't know who Lord Chesterfield was, but I'm pretty sure he's most famous now for being a jerk. 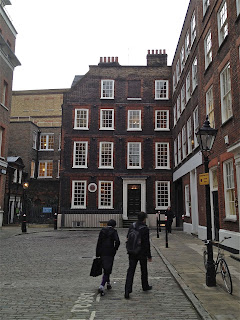 The Dr. Johnson house is in the corner of Gough Square, an enclosed courtyard space surrounded by other buildings that was here back in the day. Many well-known literary types came here to visit Dr. Johnson. One of his best friends was David Garrick, a famous writer, actor, and theater producer. He's also credited with reviving Shakespeare plays and making them popular. 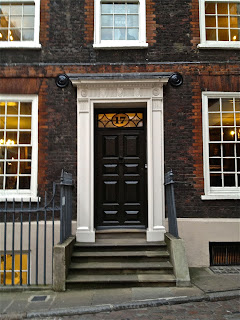 Number 17 Gough Square. Greatness happened here. And I'm just talking about the evening we were there. After meeting our friend Lynn for dinner at Ye Olde Cheshire Cheese (a two-minute walk away at most), we returned here to attend a play reading, performed on the 4th floor, written by Samuel Johnson himself. 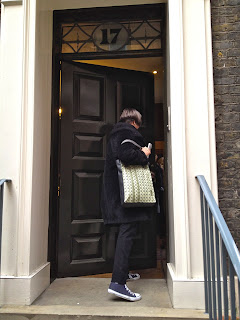 This is acutally the side door that's used for visitors during the day. Later, when we returned for the reading, we used the front door. Just sayin'. 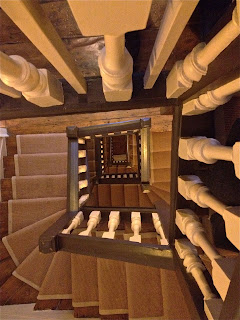 Looking down the stairs from the fourth floor, where the work was done. The stairs continue down to a basement floor where the kitchen was originally. That probably cut down on trips to the kitchen during the workday. 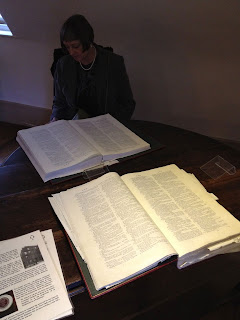 A couple of Johnson's dictionaries are available to browse. 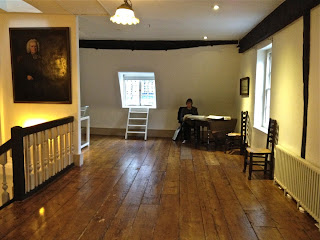 The fourth floor where Johnson and his scribes worked. They probably had long tables to spread hand-written entries across. Johnson based his estimate of time he would need to complete the dictionary (3 years) on the fact that a French dictionary had been completed in 12 years. So he figured an Englishman could do whatever the French could do in one-fourth the time. Faulty logic, as it turned out, but hey, maybe his scribes were goofing off while the very large Dr. Johnson was climbing four flights of stairs. 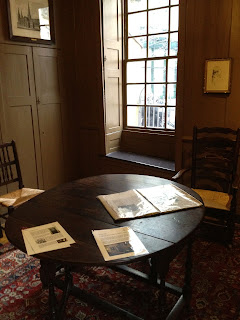 A big house. Far beyond Dr. Johnson's means. The King helped finance his stay there. But just for three years. There's a lesson here for all of us. Always pad your estimate. Especially if you have scribes doing a lot of the work. 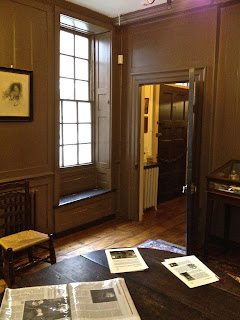 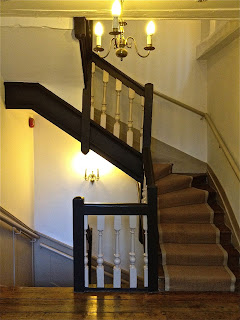 The stairs are in the middle of the house. I can see Dr. Johnson carrying the last of the manuscripts down the stairs, muttering "Last damned dictionary I'm ever doing!" 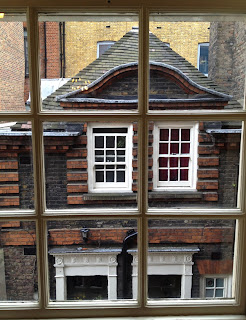 View from one of the windows, looking out to the corner of Gough Square. 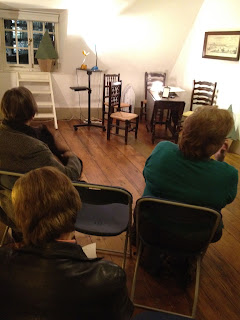 The stage is set and the audience is filled with anticipation. That's the Ghost of Samuel Johnson sitting between Robin and Lynn. 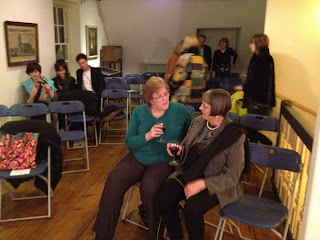 At 6:30 that evening we returned with our friend Lynn to Dr. Johnson's house for the play reading, Clandestine Marriage, on the fourth floor. The play, a comedy, was very good. And the actors were excellent, perfectly cast, we thought. A very memorable evening. How about that front-row seating, eh? And wine. Brilliant!
Posted by Unknown at 9:41 AM