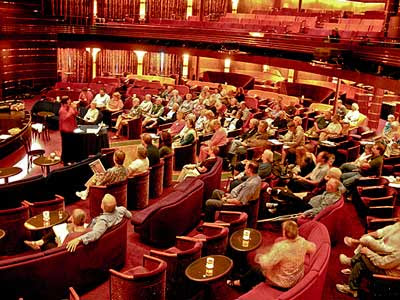 Robin gives one of her presentations in the ship's theater
I attended Robin's presentation this morning (Why Is The Nightingale In The Pomegranate Tree?). Great name, eh? A packed room of new Robin devotees listened intently. It's amazing how many Shakespeare attendees have taken the time to heap praise on her and credit her with learning so much and how they have new eyes (to put it Shakespeariously) to look at the plays. Now when she walks through the ship, everyone bows and chants "We're not worthy, we're not worthy." Just kidding again!

One of the OSF people told me that this group has given her the "credentials" that she claims she doesn't have. It could not have been a more successful event for her. I've heard more than a few tell her she was the highlight of the trip. And others express how much they learned from her. And these are people that eat-live-breath Shakespeare and live in Ashland so they can be involved in the OSF. One woman told me that Robin had raised the bar for what they expect from the OSF educational programs. I could go on and on, but she's coming this way and everyone is getting ready to bow and chant.

I attended two great talks today. Jason Snell, an editor at Macworld Magazine, gave a very good talk on Video for Mac. It made me wish I hadn't missed his other presentation earlier in the week.

After lunch I went to Sal Soghian's talk about his early days at Apple. He's the guy behind AppleScript and Automator. An amazing guy with great true stories of life at Apple. Although his particular life at Apple might not be a typical example. Brilliant guy, inspiring, and very interesting.

We spent the afternoon relaxing on our balcony. We saw flying fish and as soon as Robin went inside I saw 5 or 6 dolphins.

There's a Shakespeare Party in the Crow's Nest later tonight. We have to pack and put our bags in the hallway by 11:30 pm. And fill out evaluation forms. And maybe some other disembarkation forms. I'm going to put my people on it right after dinner.
Posted by Unknown at 3:55 PM