The trip from Nicaragua to San Miguel de Allende took all day. On the last leg of the trip, our driver delivered us around 8:30 pm. I had an address that Robin had sent me for the house we're staying in. The driver seemed to know exactly where it was, but I had no idea where the heck we were -- winding through tiny streets in a town caught in some kind of a time warp. Suddenly I saw a beautiful sight and yelled at the driver to stop! Robin was sitting outside on the curb, waiting for us.

San Miguel is more charming and beautiful than I imagined, even though everyone had told me so. Small cobblestone streets. Old, colorful buildings on hilly streets. Really a fabulous place.

The house rental is about 4 blocks from the main plaza and cathedral, the hub of town. Elizabeth and Boris were going to share the house with us, but decided it was too far from the plaza, so we have the entire, huge house to ourselves. An open air courtyard in the middle of house has access to the two bedrooms, and the main living area. Second and third floor patios have views of the city. 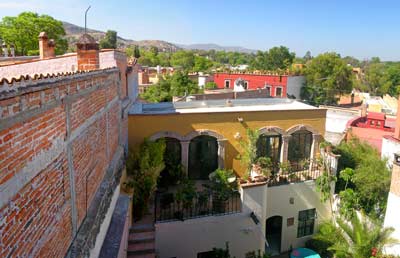 One half of the house from the 2nd story patio.

We were awakened around midnight by loud music. Sounded like a huge party with a live band within blocks of us. Around 2:30 Robin says she can't sleep so she's going out to the plaza. I can't sleep either, so I join her on a night stroll through San Miguel. Wandering through Mexican alleys at 2 or 3 in the morning isn't something I feel entirely comfortable with, but with cameras in tow, we went searching for the music. We went to the plaza, but nothing there. We wander around until we get close, but can't quite figure out where it is. By the time we get back in bed it's around 4 am, and the music stops. Or maybe we just didn't hear it. 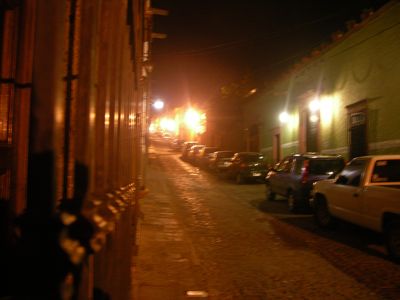 Middle of the night stroll in San Miguel.

We've spent all day wandering around the neighborhood shooting photos. This afternoon we've been hanging out at Starbucks. Free Internet connection. Viva Starbucks. Elizabeth and Boris stopped by. We plan to meet them at Harry's Bar at 6 pm. Gotta take the laptops home and get ready for a quintessential Mexico Saturday night. 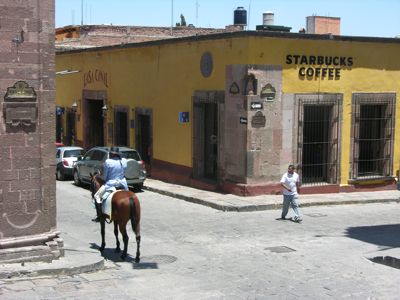