Let The Sundry Contemplation Of Our Travels Begin

To paraphrase Jaques in As You Like It: The sundry contemplation of my travels and my often rumination wraps me in a most humorous sadness.

Or something like that. I’m not sure exactly what he said, or what he meant. I just know that quotes from the Shakespearean works make pretty cool headlines.
Here are a few notes that cover our first day of travel to London:
• Going through airport security in Albuquerque is the usual inconvenience of taking off your shoes, unpacking the laptop, etc. I decided to wear my expensive, light-weight, Euro shoes (bought them last year in London), even though they’re falling apart and I had to use Shoe Goo to glue the soles to the toe of the shoes because they're separating from the soles. Even though they’re looking ratty, I figured they’d be comfortable on the plane and easy to take off/put on at security check points.
• Waiting for our international flight in Houston I notice two small kids wearing heavy winter jackets, getting ready to board a flight to San Salvador. Zounds! It’s 75° Farenheit in Houston, not to mention how hot it must be in San Salvador, which is below Gautemala. Excuuuuse me, but what?! 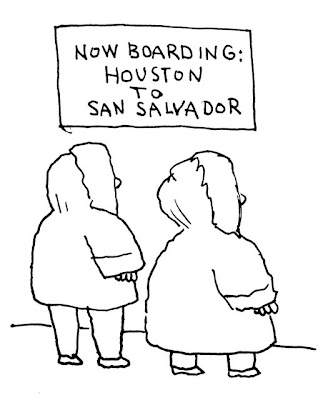 • By the time we get to Houston I’ve decided that my lightweight Euro shoes aren’t very comfortable and it was a bad idea to wear them since airports require so much walking. The sole is too thin or too worn out, especially the left one. Ouch.
• I had planned to watch non-stop movies during the flight to London, but the color video screens that are built into the seat-backs are of such phenomenally horrible quality that I couldn’t take the visual abuse. Especially after having to walk through the First Class and Business Class cabins to get to our seats and seeing that everyone there had their own large flat-screen TV.
• During the flight to London I realize I’ve lost my comb somewhere between Santa Fe and mid-Atlantic Ocean. No big deal, it doesn’t help much anyway.


I never drink on flights, but since Robin is having wine…


• We arrive at our hotel, The Academy, near the British Library, Saturday mid-morning. The rooms aren’t ready so we wander around the neighborhood and have lunch at Tas, a Turkish restaurant.

Below, a few photos from the ’hood:

Shoe & comb update:
While in a Boots Pharmacy store to buy a Brita water filter carafe for our hotel room I walked down some stairs and noticed something weird going on with my left shoe. Then I remembered: When I took my shoes off to go through security in the Albuquerque airport I placed my comb in my shoe because security guys said “everything out of your pockets.”

The good news: the left shoe is much more comfortable now and I found my comb. The bad news: these shoes are in worse shape than I thought. Fortunately I have a second pair packed.