Too Many Photos Already

When we arrived at the Paris train station, Gare du Nord, we followed the directions we'd been given to get to the apartment. The signage in the Paris subway is not nearly as fool-proof as in the London Underground. After taking a couple of wrong turns in the tunnels when we had to change trains, we found our way and ended up in the correct general neighborhood, Montmartre.

We started walking, the wrong direction, but figured that out after a few blocks and turned around. Finally we found the building and as we tried to figure out how to get in, a doorman let us in. There was nothing in the lobby, nobody, no desk. While we stood there with question marks floating over our heads, the landlord, Pascal, happened to walk through the lobby. Our eyes meet... the music crescendos and he figures we must be the Americans who are looking for his apartment.

The apartment is on the 7th floor and faces north. We're already on the north side of the city, so our view doesn't  include anything spectacular, since the main part of the city is in the other direction. But we're close to lots of stuff that we wanted to be close to. 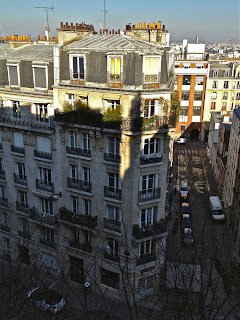 View from our apartment. 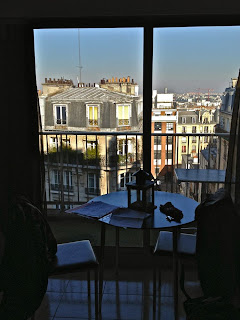 The balcony. It's freezing cold outside, and the glass door is very drafty. And the bed, a fold-up couch, is in this room. Now that I think of it, this is the only room, besides the bathroom. It contains the world's smallest kitchen. 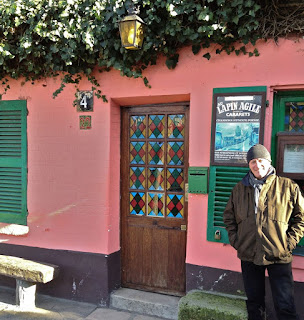 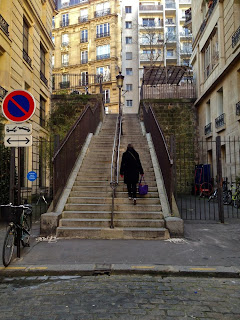 There's lots of these steps in Montmartre. This is one of the shorter ones. 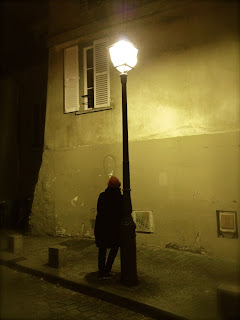 After spending the afternoon in Montmarte, and then down the hill to the Pigalle area (the main area for prostitutes and sex shops). Forgot to mention, I'm a student of Parisian culture. At least now I am. So it's OK. We didn't start the walk back to the apartment until after dark. That's Robin under a street lamp in Montmartre, not Pigalle, so it's OK.

For you phone app fans, I downloaded a great app, Paris2Go, to my iPhone that's worth every cent of the 99¢ price. It's a map of Paris, downloaded to the phone (so you don't need Wi-Fi or a mobile phone connection) and it uses the phone's GPS to show where you are and what direction you're heading. It made very easy for us to go where ever and find our way back.

Today we had an afternoon meal at La Maison Rose (the two previous blog articles). The lone employee saw me with my iPhone, came over and said "Do you want wee fee?" I look at Robin. She looked at me, looked at him, back at me, then a light bulb appeared over her head as she laughed and said "Yes, we'd like Wi-Fi." He gave us a card with the Wi-Fi password on it. 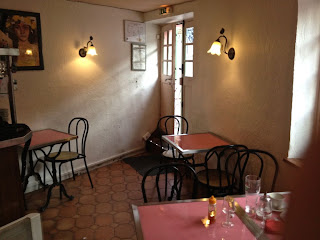 La Maison Rose is a tiny place. As soon as we paid the tab, the guy ran outside, grabbed the signboards, brought them inside and started closing up.

A Toast To Oliver and Roland

College pals. Continued speedy recoveries to you, from Montmartre. 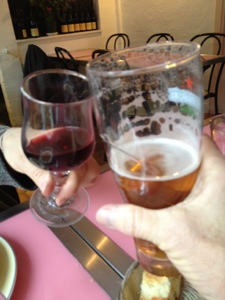 Having a late afternoon snack in Montmartre. 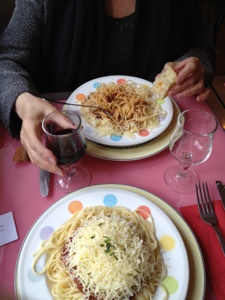 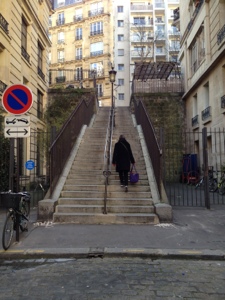