Lunch With A Hollywood Star

After the Cezanne exhibit, Robin and I made our way over to the Cafe de Flore, one of the most famous cafes in Paris since the 1800s.

As we enjoyed our quiches, wine, and hot tea, I recognized someone a couple of tables away having lunch with a couple of women. A Hollywood movie/TV star. I was going to post his name, then thought "What if he's here on a secret project, what if he's enjoying anonymity and doesn't want to be outed?" Oh well, it's not like he's the top of the A list, so it's not that big a deal. But still... 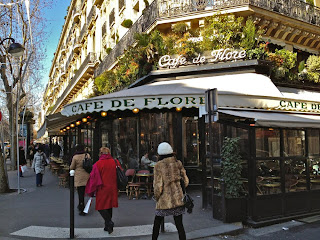 Cafe de Flore reeks of Paris Cafe-ness. Still popular, good food, and great service (older men who seem to have been here for decades, or longer. 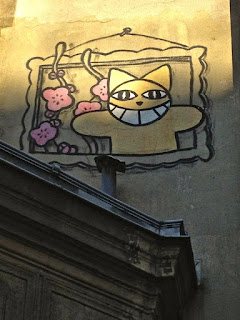 On the walk from the Cezanne exhibit, we passed another street artist painting of the very cool smiley kitty. 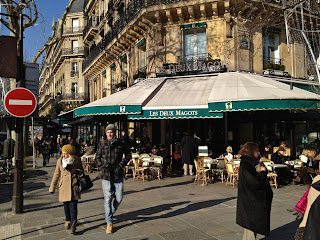 The Two Magots has been the rival cafe to Cafe de Flore for a hundred years plus. The two cafes are just a half block apart. 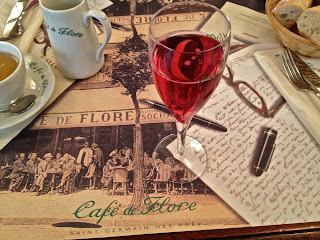 Hot tea and wine on the cafe placemats.

That was the first half of the day.

We set our alarms for 7 a.m. so we could catch the Metro to the part of town where we have tickets to a Cezanne exhibit at 10 a.m. Things were going smoothly until we got to the elevator on our floor (7th floor) and pushed the button. No elevator. We take the stairwell, get down one flight and run into a woman with a small kid and a baby in a heavy stroller coming into the small, circular stairwell, trying to get down the stairs. Robin convinces her to take the baby out of the stroller and carry it, and I carry the stroller down. Halfway down the stairwell lights go off (on a timer and don't stay on long). Fortunately I was near a stairwell door and found another light switch and turned them back on.

We got back to the apartment late afternoon, elevator still broken. No sign of elevator repairmen. Our apartment is now a 7th floor walk-up. For that kind of real Paris experience, you usually have to pay extra, I hear. 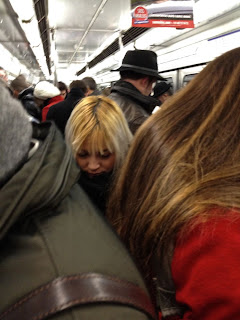 The early morning train was just what I hoped for: standing room only and get to watch people try to force their way through the crowd and get to the subway doors before they close again. Great entertainment. Unfortunateley, most people got off the stop before ours and we just walked off the train without having to wedge thru or even say "pardon, pardon." 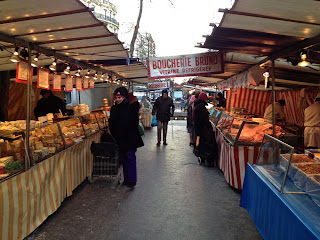 When we got off the Metro and got above ground, we were at a nice street market. The meat vendor was obviously from a long line of salesmen. I almost bought some raw meat on the way to the Cezanne exhibit.

The museum was a relatively short walk from here. We got there early enough to go to a nearby cafe and have coffee.

The exhibit was great. Got to see some famous paintings up close and learned a lot about the artist. Didn't know he died in his late 60s because he was painting outside, got caught in a rain storm, caught pneumonia and died.

We soon leave for the trek to the Crazy Horse show and dinner.
Posted by Unknown at 10:13 AM