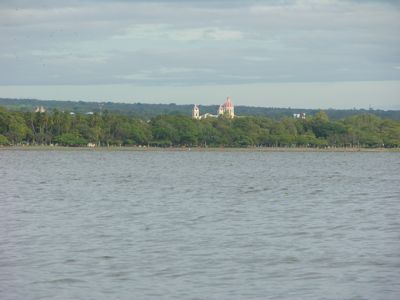 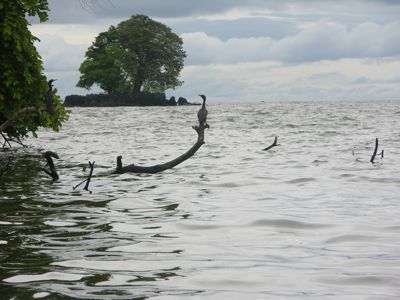 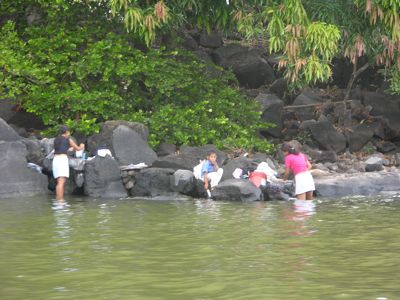 Several posts ago I mentioned that we staged a street dance for the kids in the Santa Lucia barrio where Marcia lives. The first night we did that, the kids were pretty shy. The next night we did it again, and the kids were revved up and ready to baila! (Dance!).

At the street corner 50 yards away, I started shooting. The kids were rockin'. Then it started to pour. I put the video camera under my shirt and ran towards Marcia's house. I stopped under the nearest portal overhang to wait for Marcia. She's nowhere around. I look back at the corner house, across Calle Santa Lucia (and on the other side of the minor flash flood rushing down the Calle) and everyone's inside the house, standing in the front door (one of those corner doors that are popular here), and motioning for me to come back, waving their arms frantically. What could I do -- I ran in the pouring rain back down the block. By the time I got there I was soaked. So with water streaming off me, I'm standing in this family's living room, Latin pop music blasting away, shooting these excited adorable kids dancing their hearts out.

I can't wait to edit it, but I'm going to post some clips in the next day or so just to give you a taste of it. After a half dozen songs, I leave my camera there, run in the rain to Marcia's house to get umbrellas and a plastic bag for the camera and iPod speakers. I run in the rain back to the corner house. Then we walk back to Marcia's house, amazed at how these kids are getting into it.

The next day, Marcia says "I don't think we'll do anymore dance stuff. We have enough."

I say "I'll bet the kids have been thinking all night and all day about doing it again and they'll show up again." Marcia laughs.

The next day, it's dark, we've been doing computer/YouTube stuff, and we're getting ready to go to dinner. Wham! Wham! Knock Knock, Bang Bang. "Answer the door!" Shouting and banging and suspiciously young sounding voices. It's the barrio kids and they've worked up dance routines and they want to perform for the camera and be in the movie!

Fortunately, there's a street light right outside Marcia's door, so we turn on the iPod speakers, crank up the volume to 11, and those kids start dancing it up. And of course, a small crowd of onlookers gathers on the curb to watch. JohnG is shooting photos with flash. My video camera is doing a pretty good job of shooting in low light. The street lights of the neighborhood give the scene an interesting look. All in all, I think it'll be a YouTube hit.

When JohnG has a chance, I'll grab a couple of stills from him.
Posted by Unknown at 4:44 PM

On Tuesday JohnG, Marcia, and I took a taxi across town to the barrio school where she works. She used to teach English and art, but now does mostly fundraising. The taxi let us off near the cemetery and we walked the rest of the way due to street construction. The walk through the barrio was quite an experience. So much poverty. But the people are friendly. 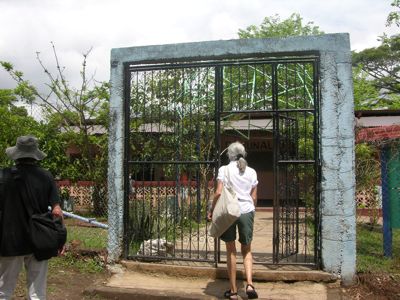 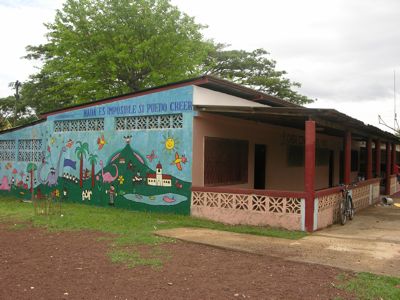 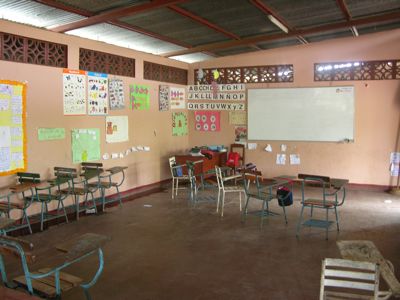 The school interior. Lunch is served here for students, and for other kids who live in the barrio.

JohnG and I (and Marcia) are walking down the muddy street with probably about $8000 worth of camera equipment hanging around our necks and in our backpacks. But no one is threatening or unfriendly. Just the opposite. I guess JohnG and I must be really bad-ass looking dudes. Or maybe it's just that most people here, especially the kids, know Marcia and love her. One of those two things -- I'm not sure which. 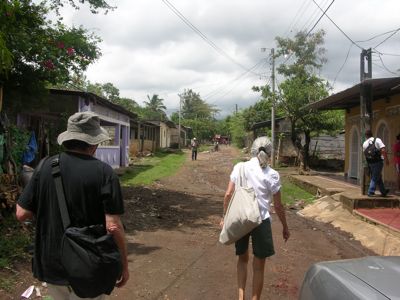 Uh Dude, where are we going?

JohnG and I shot photos and video for a couple of hours. Shots of the kids, the playground, and shots of Marcia and the school administrator, (I'll put her name here later), interviewing a dozen students and their mothers who've been invited to apply for scholarships that will help the families continue their education. This school is free, but the kids need money to continue on, for books, shoes, clothes, and possibly tuition (I'm not sure -- I'll check that out). The current scholarship money came from a generous family in the US. Some families in this school have a monthly income of $100, and the family is large. 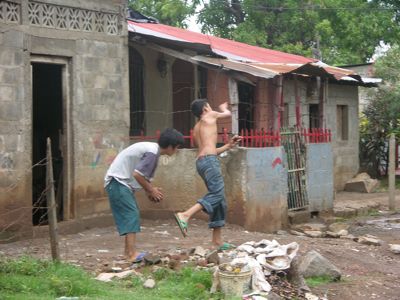 Barrio kids throwing rocks at us. Just kidding! They're playing a game.

Needless to say, we got a lot of great shots. When we left, we took the long way through the barrio to get more shots, and to walk as far as possible with a couple of young sisters who live down that way. Sorry I haven't posted video yet, but soon. I'll also grab some shots from JohnG to post. His shots are really great, and he's probably the only person I know that shoots more than I do.