Last night's performance of Coriolanus in the New Theater was intense and interesting. The costuming was modern-day soldiers and politicians. Coriolanus, a war hero, is banned from Rome, after defeating the enemy, because the Tribunes (who speak for the rioting merchants) fear his arrogance and think he'll become a tyrant. And they think he should lower the cost of grain for them. Coriolanus thinks they should shut their yaps be grateful that he saved their city. After being banned, Coriolanus joins forces with the recently defeated enemy (the Volcians) to extract revenge on Rome. He's such a great leader that the other Volcian leaders are jealous of his power. When Rome hears he's joined forces with the enemy and is seeking revenge, they're like, freakin' out. They send Coriolanus's mother, wife, and child to him to beg for mercy. It works. He makes peace with Rome. Then the Volcians kill him, Julius Ceasar style (knives and lots of blood). The End.

The stage decoration was sparse, but imaginative, with multiple trap doors in the floor providing entrances and exits, and used a props for foxholes during battles.

The theater itself is an amazing venue. It's a fairly small, round theater and our front row seats kept us within a few feet of the actors most of the time. 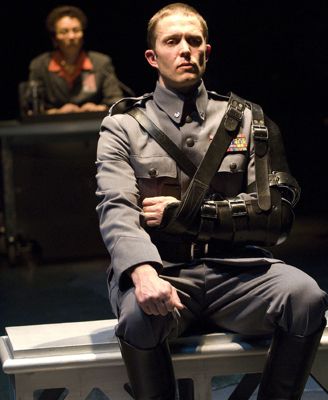 A Tribune in the Roman Senate questions war hero Coriolanus about his arrogant attitude towards the common people.

Yesterday afternoon's performance of The Clay Pot was visually stunning. But the classic East Indian drama was a little too boring for me. It's a story of a rich man who loses his fortune and most of his friends, then falls in love with a young courtesan. The brother-in-law of the king is also in love with the young woman and kills her (he thinks), then blames it on the poor man. Blah blah blah, then a happy ending for everyone. You know, the usual 1600 year old East Indian classic theater stuff. 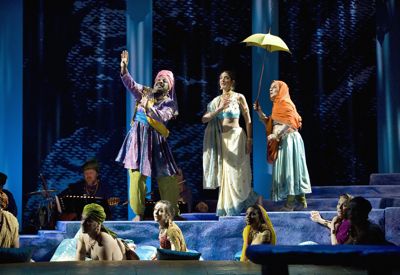 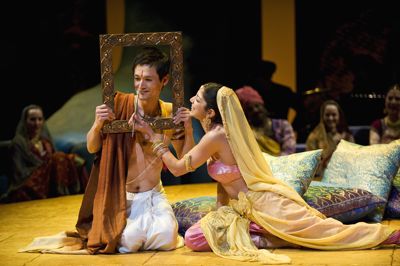 The young courtesan paints a portrait of her lover.