In Memory of Robin's 102 Year-Old Grandmother 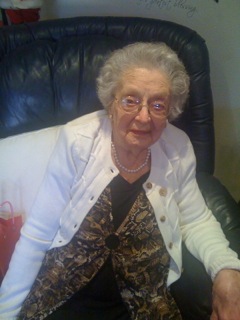 Photo taken in December 2011
Pauline Elizabeth Williams. Died January 22, 2012, age 102
Pauline Elizabeth was born on January 5, 1910, in Greenfield, Indiana, to Chauncy and Lula Gardner. In 1921, when Pauline was 12 years old (and a tomboy), her mother and father, two younger sisters, Grandpa Catt, Aunt Cora and Uncle Charley, and three cousins piled into three Model T Fords and made their slow way to Bell, California, near Los Angeles. It took six weeks to cross the country because the cars kept breaking down and mechanics were not always available. Gas cost 17 cents a gallon. Pauline was the only person brave enough to drive with Grandpa Catt, who used the sides of the mountains to slow down his car (this is probably where Pauline got her lifelong habit of fast driving). Pauline learned much later that the reason for the move was that her father was half Cherokee and he needed to get away from constant discrimination.
At 15 years old, Pauline met Wilford Williams at the Bell Friends Church. They dated for two years, married in 1927, then moved to Bakersfield, later to Berkeley, then to 610 Spokane Avenue in Albany, California, where they bought a brand-new home for $1500 and worried about paying that mortgage. By the time Pauline was 22 years old, she had a two-year-old, a one-year-old, and twins, all boys. She was proud of saying that they were all in bed by 6 p.m. every night, although there are many stories of naked boys running down the sidewalk, playing traffic cop in the street, nearly getting run over by trains, and getting locked in the trunks of cars.
Pauline and Wilford formed a group of friends that met almost every week to play cards, have dinner, or just chat. Pauline was part of the mothers' Twin Club, a sewing club, and helped plan most church socials. She played the piano and organ at the Friends Church in Berkeley. She worked at Union Oil during WWII and retired from Cutter Laboratory in 1975, then volunteered at Alta Bates Hospital gift shop for 15 years, and at Tele-Care for another 18 years. She is proud to have traveled to 13 countries and 43 states. She lived in the house on Spokane Avenue for 71 years, and every year hosted a Christmas Eve feast for her ever-growing family. One might stop by the house and find her on the roof fixing a leaky patch at age 76 or mowing the lawn at age 83.
Pauline's second hip fracture at age 97 forced her to stop driving, and she moved in with her son Lloyd in Pittsburg, California (and for the next several years she constantly insisted that she wanted her driver's license back). No one remembers Pauline ever driving at the speed limit or below. At the age of 101, she complained that she needed to find a new doctor because this one couldn't find the reason why she was often tired.
Pauline lived through the deaths of her husband Wilford, her sons Gerald, Merwyn, and Floyd, daughters-in-law Lyla and Jean, three sisters (Vivian, Frances, and Juanita), and her oldest grandchild, Jeffrey. She is survived by her son Lloyd and daughters-in-law Pat, Rita, and Janice, 15 grandchildren, 31 great-grandchildren, and 4 great-great-grandchildren. Pauline wanted to be remembered as a very active person who helped others. She was in excellent health and mind until her very last days and passed away peacefully.
May we all be so blessed.
Posted by Unknown at 8:18 AM