From the Cistern and the ceramics shop we continued on in the rain to Topkapi Palace, a former palace and now a museum. I remembered it from the 1964 movie, Topkapi, starring Maximilian Schell and Peter Ustinov.

Topkapi was the primary palace of the Ottoman Sultans for about 400 years of their 624-year reign. There were normally 2000 residents living there full-time to run the palace. At times that number grew to 4000 residents.

Eventually, Sultans built newer palaces along the Bosphorous, spending less time here. I was able to get just a few photos before I was informed by a guard that photography is not allowed inside the buildings. Since I've seen the movie Midnight Express, I didn't want to risk going to a Turkish prison, so I stopped taking photos. 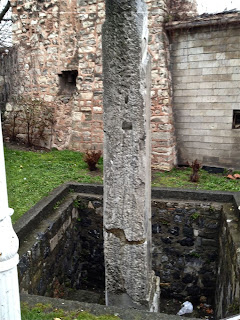 We passed what remains of a column that the Romans used as the starting point for measuring all distances from Istanbul. 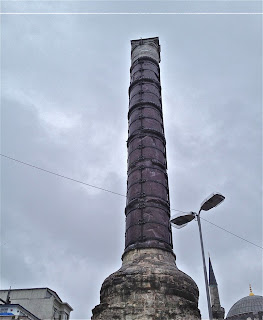 The Hooped Column, or the Column of Constantine. It commemorates the declaration of Byzantium (now known as Istanbul) as the new capital of the Roman Empire in 330 AD. In 1106 a strong wind causes the statue on top and three of the stone cylinders to fall. Some years later a cross was put on top and the metal hoops were added to make it stable. The joints were covered with bronze wreaths. The wreaths must have looked nice... crusaders who looted the city in 1204 took them, along with gobs of other stuff. Be glad you weren't there. 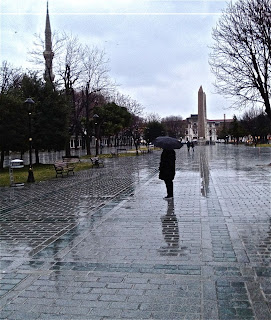 A solitary figure stands in the rain near the Blue Mosque. She looks familiar. 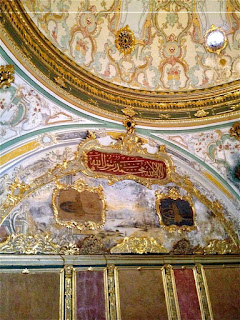 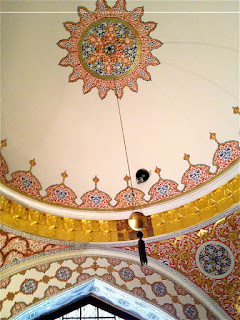 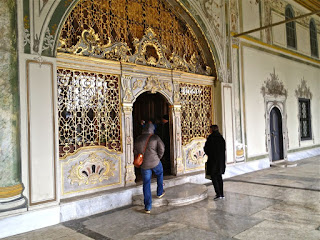 This room is where the sultan would greet ambassadors and important people. 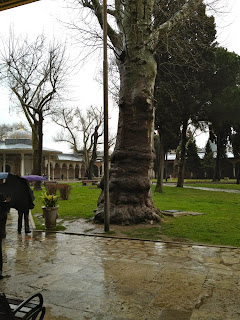 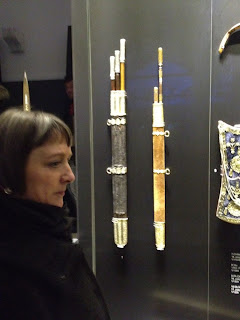 Robin is trying not to think about the killing that's represented by the ancient weapons of war in this exhibit. I was excited to get lots of photos of the weapons in this room when a guard said something in Turkish that sounded like "Did you see the movie Midnight Express?"

We wandered over to the harem section. There was an extra entrance fee to go in the harem, but I'd decided it would be worth it, perhaps the last chance I'll have to hang out in a harem. And maybe the only chance I'll have to see Robin in a harem. Zounds! The harem closed just before we got there. The harem quest continues, and the odds of a future trip to Istanbul suddenly improve.
Posted by Unknown at 1:53 PM