As we left York this morning... 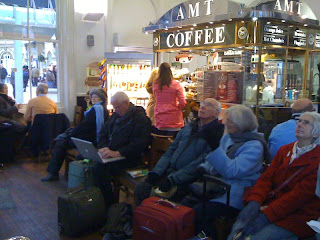 Robin snapped this photo in one of the York train station waiting rooms. Hey look, some old-timer is using a MacBook. Other old-timers are looking up at a digital message board for updated train delay information. 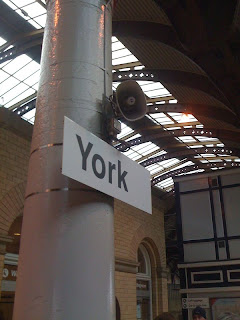 Listening to official announcements about train delays and cancellations was impossible at first. Every announcement was a female voice echoing throughout the train station that sounded like “Wah wah waaaaah rah wah wah rah waaaah.” I soon discovered that if you stand within several feet of a speaker, and make sure the speaker is aimed directly at you, you can actually understand what’s being said. 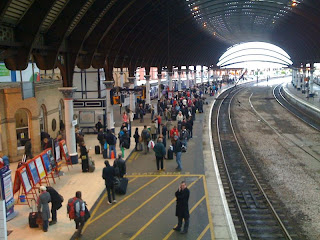 From a crosswalk that crosses the over the tracks, I snapped this photo of the madding crowd. Five points if you find Robin.