On the train from York to London

Our 10:28 a.m. train finally arrived at 12:32 and we're on our way to London, the laptop's plugged in and charging, and the WiFi signal is good. The train is nearly empty. When we went to our assigned seats (with a table) a couple was sitting there. When we noted that they were in our seats, they said all reservations had been cancelled and that seating was open to whoever. There was one other table seating available here in Car E so we claimed it. 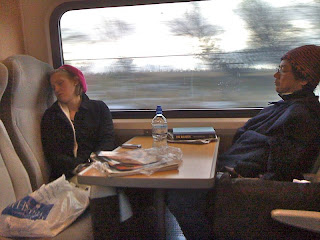 Our seating and table are exactly like the one across the aisle from us. Looks relaxing, eh?

When we checked out of the hotel this morning, Robin looked over the bill and questioned a charge of 11 pounds for tray service. It seems that the room service menu includes a fee for delivering the food to the room. And it's clearly stated on the room service menu, in 2 point type at the bottom of the menu, buried right after a sentence or two about food allergy warnings. The desk person removed the charge when she realized we were looking incredulously at the menu's tiny type. So after she removed that charge and another 100 pounds worth of charges that were unjustified, we moved merrily along to the train station next door. 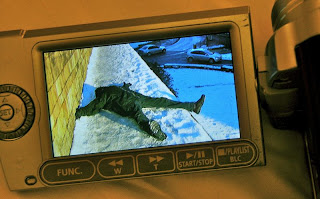 I've mentioned before that most of the walks on the city walls have been closed due to slippery snow and ice (and no handrails). Here's a shot of me Robin was able to grab as we walked one of the sections that wasn't closed. Fortunately she had the presence of mind to take a blog photo before giving me first aid.

Just kidding! I didn't fall. At least not in this photo. I did completely slip down once, and almost fell several other times during our York visit.

I forgot to bring the cable with me to York that I use for downloading photos and video from my video camera, so I shot the video screen with my other camera.